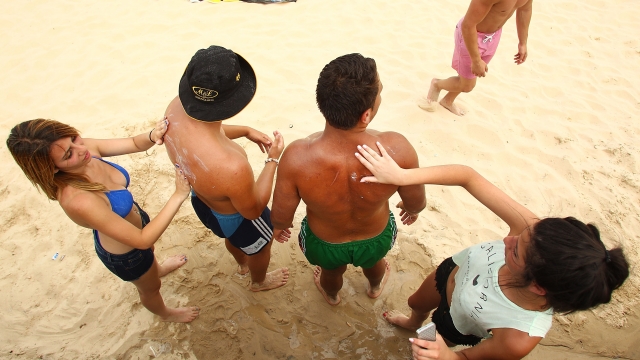 SMS
FDA: Sunscreen Ingredients Can Seep Into Bloodstream After One Use
By Ahmed Jawadi
By Ahmed Jawadi
January 21, 2020
​Researchers found six active sunscreen ingredients were absorbed into participants' bloodstreams and remained in the body days after the last use.
SHOW TRANSCRIPT

A new FDA study has found that several sunscreen chemicals are absorbed into a user's bloodstream even after a single use.

The study, published in the Journal of the American Medical Association on Tuesday, builds on a pilot study the agency published last year. In the new study, researchers tested the absorption of six active ingredients found in four commercially available sunscreen products. Participants applied sunscreen to 75% of their bodies over four days: Once on the first day and four times daily for the next three days. Researchers found that all six ingredients were absorbed into the bloodstream and that the chemicals remained in participants' bodies days after they last used sunscreen. They also found concentration levels exceeded the FDA's threshold for requiring safety testing.

Even in light of these findings, the agency still "strongly advises all Americans to continue to use sunscreens ... given the recognized public health benefits of sunscreen use." The FDA says more research is needed into understanding the chemicals' absorption into the body and what effects that absorption may have.