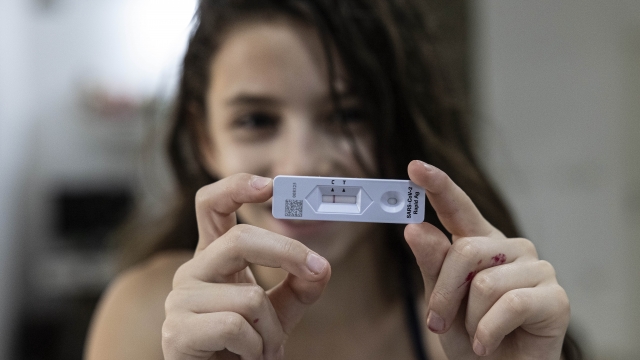 César de la Fuente developed an affordable rapid test for COVID-19 more than a year ago.

"Our dream is to someday maybe see one of these in pharmacies," said de la Fuente, a presidential assistant professor at the University of Pennsylvania.

A swab from the mouth or nose transforms into an electrical signal for analysis by a machine that can be made small enough to plug into a smartphone.

The prototype has been peer reviewed and published, shown to be 87% accurate at detecting positive COVID cases, but it can't be sold anywhere yet.

It does not yet have FDA approval.

"I thought, OK, we're going to need to hire more people to help do all this stuff," de la Fuente said. "I don’t really have the personnel to take on that now."

A Newsy investigation found the FDA is keeping in place guidelines that are preventing low-cost over-the-counter coronavirus antigen tests from flooding the market, even as President Biden tries to end a shortage of rapid tests.

The FDA sees home tests as a medical device for one person, just like every other COVID test, requiring a high level of precision and lots of evidence to back up claims of effectiveness.

It's a focus on quality over quantity.

That contrasts with an approach embraced overseas where less regulation of rapid tests allows stores to sell a bounty of them at prices affordable enough for families to screen themselves every day before heading to work or school.

The idea is, even if some of the tests are not as accurate, they're so fast and cheap that you can test often enough to catch an error in less time than the days it might take for results from a gold-standard PCR lab test.

"Even if it's not perfect, the advantage of repeating over time makes it just as effective as a highly sensitive, and also highly expensive and delayed, PCR test," said Democratic Rep. Kim Schrier of Washington.

She has been pressing the FDA to clear more at-home tests, seeing them as a simple tool for preventing community spread.

"This is not the test that decides whether you go into the hospital or not or which antibiotic you get, or antiviral," Shrier said. "In this case, this is the test that tells you, hey, today's the day to stay home."

The FDA has so far approved seven at-home over-the-counter rapid tests, compared to 34 self-tests on the market in Germany.

The FDA would not disclose to us how many rapid tests have applications for approval still pending.

The company says multiple trials run by the developers show it can detect more than 90% of positive COVID cases.

The developers built more than a million tests, with plans to sell 30 million a month and struck a deal to sell them in 2,200 Kroger grocery stores, but they've been working with the FDA to get authorized for more than a year now.

Kroger has not been able to sell any of the tests.

The FDA says it has prioritized rapid tests for review among the heap of COVID-related products needing emergency use authorization, from experimental treatments to vaccines.

Agency documents note special consideration for home tests, where a person must "collect their specimen, run the test, and interpret their results accurately."

"For at-home tests, that bar has always been a little bit higher," said Gigi Gronvall, associate professor at Johns Hopkins Bloomberg School of Public Health. "People are making decisions based on these tests and it can be consequential for people around them."

Australian company Ellume recalled a batch of at-home kits in the U.S. for higher-than-expected false positives.

Schrier asked the FDA to run a head-to-head review of the dozens of rapid tests found around the world that do not have authorization to be sold in the U.S.

Schrier said the agency declined, saying it focuses on only those products that apply for approval.

"It sure would be nice if we could buy some of those tests, having evaluated them," Schrier said. "We would have this capacity in this tool that so many other countries already have."

De la Fuente says he understands the FDA's caution, even though it's keeping his test confined to the lab instead of on store shelves.

"We have to follow the rules; they're in place for a reason," de la Fuente said.

He and his team have since invented two other rapid COVID tests.

One uses graphite from pencils.

Another test he says will cost just 15 cents involves a cotton swab that changes color to indicate infection.

"The way I like to think of it is kind of like a pregnancy test for COVID," he said.

Even if the FDA gave the green light for his tests tomorrow, there are still other hurdles he would face getting them to market.

"I would say the main challenge would be scaling up production," de la Fuente said.

He would need someone to make his kits by the million, and he can't seek a manufacturer without FDA approval.

"It's just a bit frustrating to see that there's a lack," he said. "We know they're an incredible tool for prevention.”

The White House announced new steps to surge production of rapid at-home tests, including a plan to buy $1 billion worth of kits to quadruple supply by December, but only those tests that have met the FDA's high standards.