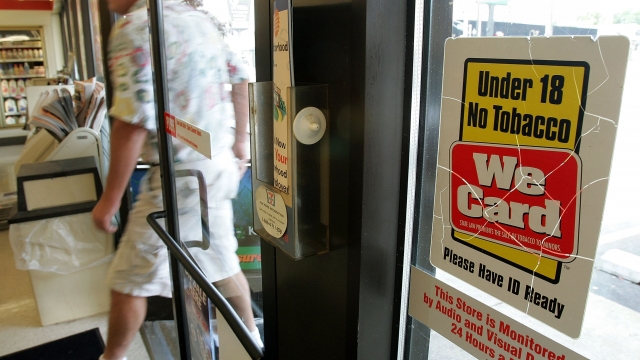 The new rules apply to cigarettes, cigars, chewing tobacco and vape products, among other things.

The Food and Drug Administration has officially raised the minimum age to buy tobacco products in the U.S. from 18 to 21.

It will apply to all cigarettes, cigars, chewing tobacco and vape products, among other things.

The provision is part of a $1.4 trillion spending package signed by President Trump on Dec. 20. The act also appropriated $1.4 billion for building a U.S.-Mexico border wall and $1.7 billion for mental health programs.

The tobacco legislation had bipartisan support; it was introduced in May by Senate Majority Leader Mitch McConnell and Sen. Tim Kaine.

At first it was unclear when the new rule would be enacted. The FDA could have taken up to six months to amend its policies, and then the new law would take effect within 90 days.

But the FDA's website currently reads, "It is now illegal for a retailer to sell any tobacco product — including cigarettes, cigars and e-cigarettes — to anyone under 21."

According to the Campaign for Tobacco-Free Kids, 19 states and the District of Columbia had already raised the minimum buying age for tobacco products to 21.