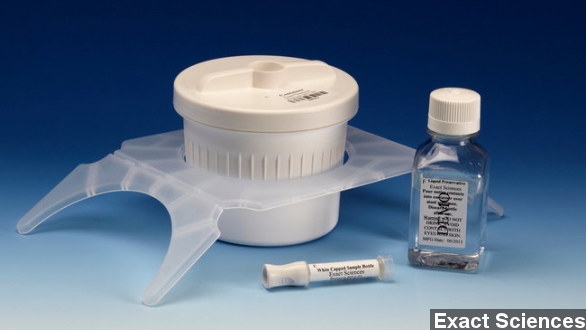 In a move that might help stem the number of deaths by colon cancer, the U.S. Food and Drug Administration has approved a new at-home test it calls both accurate and noninvasive.

The test, called Cologuard, is made by the company Exact Sciences and boasts a 92 percent accuracy rate.

"Colon cancer is actually thought to be the most preventable but least prevented cancer."

According to the Centers for Disease Control and Prevention, colon cancer is the second-leading cause of cancer-related deaths in the U.S., and the earlier it's found, the better.

That's why health officials recommend a colonoscopy at least once every 10 years for every American over 50.

The problem, according to doctors, is that patients shy away from getting colonoscopies. That's why the new test could be a game-changer.

​In the press release, the FDA said as many as 60 percent of colon cancer deaths could be avoided if people were getting properly screened. So the hope is that people who won't get colonoscopies might at least use take-home tests.

The Centers for Medicare & Medicaid Services said it's even considering paying for the test for people over 50 who use its service nationwide.

Still, Cologuard isn't perfect: It has a fairly high chance of coming up positive when nothing's actually wrong. But the next step after getting a positive result is to get a colonoscopy, which is what officials want people to do anyway.

This video contains an image from the U.S. Navy.