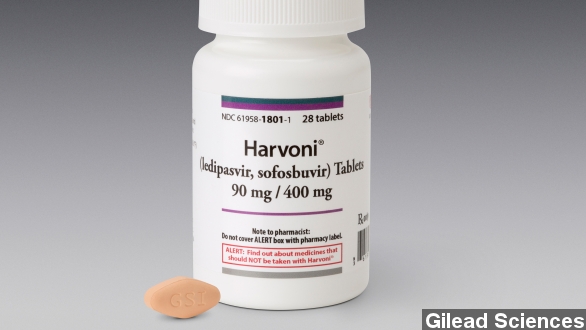 By Jasmine Bailey
October 11, 2014
The U.S. Food and Drug Administration has approved the first once-a-day dose pill for the treatment of type 1 Hepatitis C.
SHOW TRANSCRIPT

Big news from the medical community for people who suffer from type one of Hepatitis C: Friday the U.S. Food and Drug Administration approved the first once-a-day combination pill to fight the virus.

The breakthrough medication for adults is called Harvoni and is made by biotechnology company Gilead Sciences. According to the FDA, the pill will completely transform the treatment standard for the more than 3 million Americans living with HCV.

Hepatitis C affects the liver, leading to inflammation, and is contracted through the blood of an infected person.

Harvoni will eliminate the need for the once standard and painful interferon injection treatment that causes a number of side effects, including intense itching and flu-like symptoms. In trials, Harvoni didn't just get rid of symptoms; it essentially cured over 80 percent of patients with few side effects. (Video via Gilead Sciences)

But gaining access to the drug could prove challenging for many Americans. Harvoni is very expensive.

KABC: "The price has draw scorn from patient groups, insurers and politicians."

A spokeswoman with Gilead says the price is a reflection of the medication's value. And as an analyst for CNBC points out, the price is actually lower than the current standard treatment.

"What perviously had been a combination with Sovaldi and Johnson and Johnson was over $150,000 dollars."

And that relatively lower price rage could actually help more patients gain access to the new medication. A writer for Forbes notes the higher cost of Gilead's Sovaldi hit medical insurers hard — forcing them to implement strict regulations on which patients would be eligible for coverage.

It's still unknown how insurance companies will handle coverage of Harvoni. Members of the U.S. Senate have reportedly asked Gilead to show documentation explaining why the medication will cost so much.