FDA Approves Heroin Overdose Antidote For Bystanders To Use 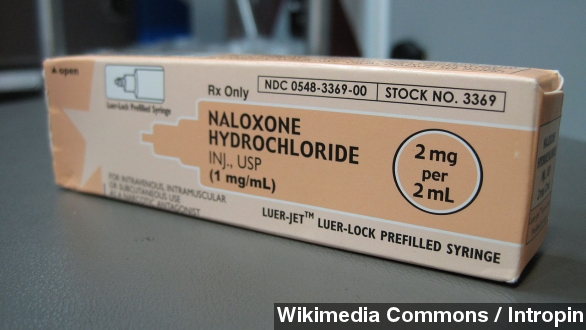 SMS
FDA Approves Heroin Overdose Antidote For Bystanders To Use
By Laura Heck
By Laura Heck
April 3, 2014
Evzio is the first naloxone kit that can be used by family members and caregivers of heroin addicts to potentially save them from an overdose.
SHOW TRANSCRIPT

In response to the rising death rates of heroin and other drug overdoses, the FDA rapidly approved a new, hand-held device called Evzio (ee-VEE-zee-oh) that delivers a life-saving heroin and painkiller antidote called naloxone.

"It's a device that automatically injects the right dose of naloxone to someone who has overdosed. It can be prescribed by doctors to family members or caregivers to keep on hand just in case." (Via Time Warner Cable)

If naloxone is delivered to an overdose patient within the one- to three-hour window before death, it can give him or her enough time to get to a hospital for treatment. (Via WGRZ)

Evzio is the first kit approved for use by people who are not in the medical community and use of the device doesn't require extensive training.

According to The Cincinnati Enquirer, parents and friends of adult heroin addicts have been pushing for more distribution of the drug to keep on hand. CNN explains how it works:

"The drug locks onto receptors in the brain, it slows the body down. Lock up too many, and you stop breathing. Naloxone can free up those receptors, essentially bringing you back to life."

The drug apparently causes instantaneous and severe withdrawal symptoms when the patient wakes up. People who administer it should still call 911 or take the patient to a hospital immediately. (Via Los Angeles Times)

The Washington Post reports naloxone has long been used against a class of painkillers that includes heroin called "opioids." There are 16,000 painkiller-abuse deaths in the U.S. each year.

But, as Newsy reported back in February, The White House began pushing for more wide-spread distribution due to the rapidly rising number of overdose deaths and high-profile overdose cases like that of Phillip Seymour Hoffman. (Via New York Post)

According to Time, the distribution of the drug was limited until now because it was only available by prescription and by complicated injections.

Forbes reports the price of the kit hasn't yet been decided, but it will cost more than the typical naloxone dosage, which costs about $45.

So far, 17 states have approved measures to increase the availability of naloxone, and states like New Jersey and New York are giving antidote kits to emergency and police officials.