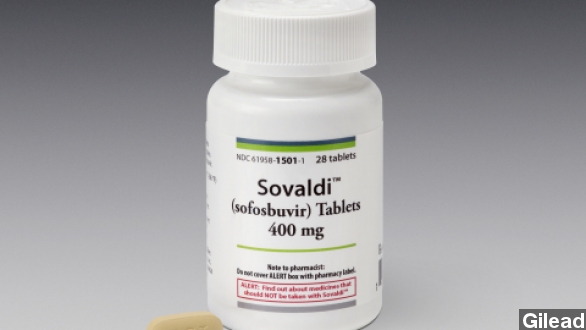 The Food and Drug Administration approved a new form of treatment for hepatitis C Friday — one that is reportedly more efficient and more effective than current methods.

It's called Sovaldi and was created by U.S. biopharmaceutical company Gilead Sciences.

"In combination with other drugs ... officials say in clinical trials it cured about 90 percent of patients in just 12 weeks." (Via News 12 Long Island)

The current treatment is a combination of a weekly injection called interferon and a daily pill called ribavirin. It only works for about 70 percent of patients and can cause severe flu-like symptoms along with anemia and depression. But this new class of medication has very few side effects. (Via WDAF)

Nearly 3 million Americans have hepatitis C, a viral disease that can cause liver disease, cirrhosis and liver cancer. (Via KVEO)

Sovaldi, known generically as sofosbuvir, treats types 1-4 of the viral disease — but at a hefty price. On average, it costs about $1,000 a pill.

The treatments vary from 12 weeks to 24 weeks in conjunction with older oral treatments, meaning the cost could reach as much as $168,000 to treat the more difficult strains.

The high price tag has medical professionals on edge. The president of the AIDS Healthcare Foundation told The New York Times, "This is unbearable to the health care system and it is completely unjustified."

But Gilead Sciences argues the price accurately reflects the higher cure rate — a rate that analysts believe will help Sovaldi become one of the best-selling drugs in the world.

But ​Initiative for Medicines, Access & Knowledge, a New York-based legal group, has filed a motion to try and have the drug's patent blocked in India. That would allow for cheaper copies to be made and distributed to developing countries.

Worldwide, some 150 million people have hepatitis C. Majority of cases are contracted through injecting drugs, but it can also be spread through sexual contact and blood transfusions, among other causes. (Via Centers for Disease Control and Prevention)

The FDA calls the approval a representation of "a significant shift in the treatment paradigm." Sovaldi is currently under review by the European Union.​ (Via FDA)