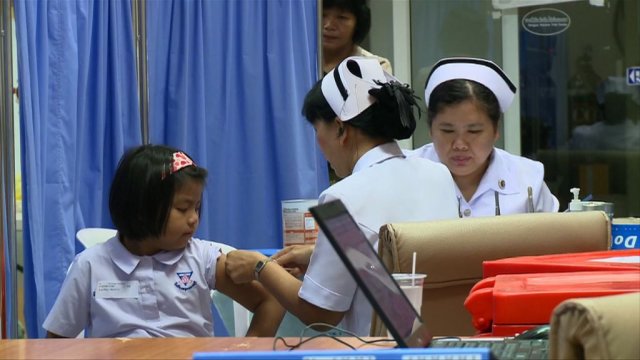 SMS
FDA Approves Dengue Vaccine With Strict Guidelines
By LeeAnne Lowry
By LeeAnne Lowry
May 5, 2019
The FDA approved a vaccine for a mosquito-borne illness that kills 22,000 people every year.
SHOW TRANSCRIPT

The FDA approved a controversial vaccine for dengue, the most common mosquito-borne virus in the world. But it comes with some strict stipulations.

Dengue fever is a leading cause of illness among people in the tropics and subtropics, and the CDC estimates 2.5 billion people live in regions of high risk. There is no cure for dengue, and the World Health Organization estimates 22,000 people die of the disease every year. Most of the deaths are children.

The first time you catch dengue, it's not life-threatening. It feels kind of like the flu or a mild virus, and sometimes it doesn't have any symptoms at all. If you get dengue a second time, it's a different story. Subsequent infections are much more severe and can result in excruciating pain or death.

The newly-approved vaccine — and the only one on the market — is called Dengvaxia. It was embraced when it was released in 2015. The Philippine government used it in 2016 to vaccinate over 800,000 children. But the next year, the manufacturer disclosed that the vaccine could, in some cases, actually make the illness worse. That led to widespread anger and fear of vaccinations in general.

That's why the FDA's approval comes with strict guidelines. It only allows for children ages 9-16 who have had dengue before to get the vaccine. If a child gets the vaccine before they have the first, less harmful dengue, the vaccine could fast-track them to the more deadly virus, according to the FDA.

In those specific conditions, the vaccine was determined to be 76% effective. It was approved on Wednesday, and the FDA called it an important step to reducing the impact of the virus worldwide.