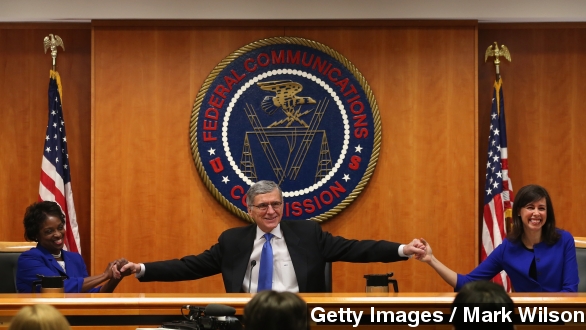 “All in favor say aye. Opposed? The Ayes Have It,” FCC Chairman Tom Wheeler said at Wednesday’s vote. (Video via C-SPAN)

The FCC has stopped short of classifying the Internet as a utility or regulating rates Internet service providers, or ISPs, have to charge.

But under the new rules, ISPs cannot charge content creators extra for preferential treatment of their content or artificially slow down any traffic on their networks. Fast lanes are forbidden.

Netflix, for example, won't ever have to pay a premium to stream faster than Hulu.

For us end users, the Internet tomorrow is going to look and act mostly the same. You shouldn't expect faster speeds — or a lighter bill, for that matter.

Instead, the new rules will help keep incumbent ISPs from muscling smaller providers out of the market. (Video via Comcast)

And with the vote out of the way, we all have a minute to catch our breath before the lawsuits start.

That's how this all began, after all: Verizon got the old net neutrality protections remanded to the FCC in January of 2014. The court said the FCC didn't have the authority to regulate Verizon's Internet services.

And that's how it will continue. ISPs have indicated they'll challenge the FCC's new rules, and congressional Republicans are planning legislation to get them overwritten.

For his part, FCC Chairman Tom Wheeler suggests the commission has no choice but to step in. “The Internet is simply too important to allow broadband providers to be the ones making the rules,” Wheeler said.

Tim Wu — the guy who coined the term net neutrality in the first place — told Marketplace he expects the new rules will stand up to the courts.

"The other commissions have always sort of gotten weak at the last minute and hamstrung themselves by doing something stupid. Tom Wheeler, this chairman, has used every power his agency has," Wu said.

Lawsuits notwithstanding, the FCC's new rules will now go to the Federal Register and will take effect 30 days afterward.

This video includes images from Getty Images and Romewhenin, and music from Little Glass Men / CC BY 4.0.