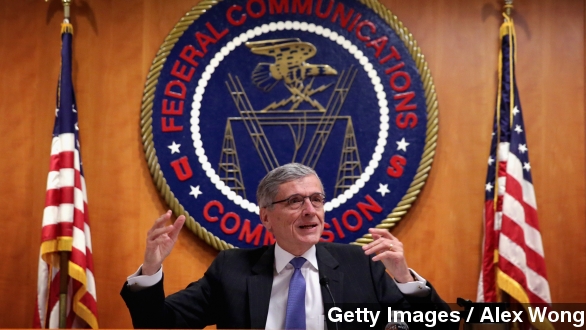 By Christian Bryant
September 9, 2014
FCC Chair Tom Wheeler said in an op-ed Tuesday the NFL blackout rule is outdated and only in place to increase the league's revenue.
SHOW TRANSCRIPT

Critics have been lining up to go after the NFL and Roger Goodell for supposed missteps — lopsided player penalties, anyone? Not to be left out, Federal Communication Commission Chairman Tom Wheeler said the agency will soon vote to "sack" the NFL's longstanding blackout rule.

In a USA Today op-ed published Tuesday, Wheeler called the FCC's 40-year-old rule nonsensical and added "We are blowing the whistle on this anti-fan practice."

The NFL's blackout policy was implemented in the '70s and prevented games from being broadcast locally if the arenas weren't sold out. It was a way to get more fans in the seats.

Gigaom explains, "The blackouts exist in the first place as a way for NFL owners to ensure they don’t lose out on ticket and stadium-related revenue due to fans watching the game at home. Under the rules, owners can declare a TV blackout in an area around their stadiums up to 72 hours ahead of any game that is not sold out."

Wheeler says that rule is outdated and prevents some fans from watching their favorite teams while at home. Three of the five FCC commissioners need to vote against the blackout rule to see it disappear. Wheeler and two others have already voiced their opposition.

The decision to nix blackouts was first proposed at the end of last year, and since then the NFL has hit back. The league and other network broadcasters have started the "Protect Football on Free TV" campaign, saying, in part, "NFL games remain on FREE broadcast television because of the FCC’s sports blackout rule which has been working for nearly four decades."

According to NBC, a league spokesman said at least 20,000 fans — and NFL hall-of-famer Lynn Swann — support the blackout rule.

While it looks the FCC is on track to end the blackouts, a writer for The Hill says sports leagues "like the NFL would still be able to negotiate with broadcasters to block out some games." But if those leagues end up signing contracts with cable networks instead, broadcasters could suffer.

DANIEL KIRKPATRICK VIA BLOOMBERG: "Without those rules in place ... the NFL and other sports leagues will have less incentive to sign contracts with broadcast television stations."

The FCC is set to vote on removing the rules on Sept. 30.