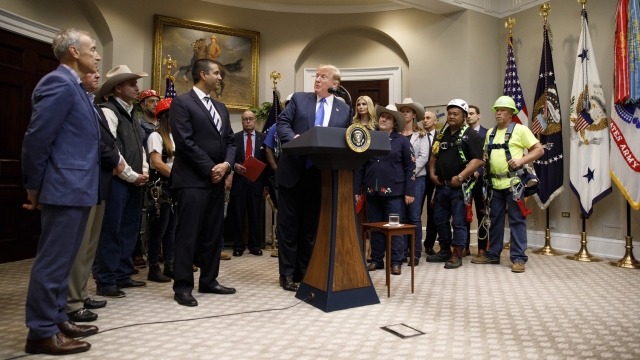 The U.S. government unveiled a new plan Friday to improve internet access for everyone in the country.

It includes expanding broadband access in rural areas, as well as a major push to develop 5G technology. President Donald Trump touted 5G during the announcement.

"5G will be as much as 100 times faster than the current 4G cellular networks. It will transform the way how our citizens work, learn, communicate and travel. It will make American farms more productive, American manufacturing more competitive and American health care better and more accessible," Trump said.

The chairman of the FCC said it will accomplish its goal by pursuing its "5G Fast Plan" — a three part strategy that includes: freeing up spectrum, making it easier to install wireless infrastructure and deploying optical fiber.

To get the ball rolling on that first part, freeing up spectrum, the FCC is going to hold its third 5G spectrum auction on December 10. That would mean more space for 5G service.

"This will be the largest spectrum auction in American history. We will be selling 3,400 megahertz in three different bands, and for those of you who aren't wireless experts, that is a lot of spectrum," FCC Chairman Ajit Pai said.

FCC Commissioner Jessica Rosenworcel criticized the administration on Twitter Friday morning and said "interventions on 5G have done more harm than good," citing tariffs on 5G equipment. In a separate tweet, she said: "the US is focusing 5G efforts on high-band spectrum, while the rest of the world is focusing on mid-band airwaves. Our failure to do so is a problem & we need to pivot to mid-band now or risk falling behind."

The other part of the plan involves spending more than $20 billion for the "Rural Digital Opportunity Fund." FCC Chairman Ajit Pai said that money "will extend high-speed broadband to four million homes and small businesses in rural America."