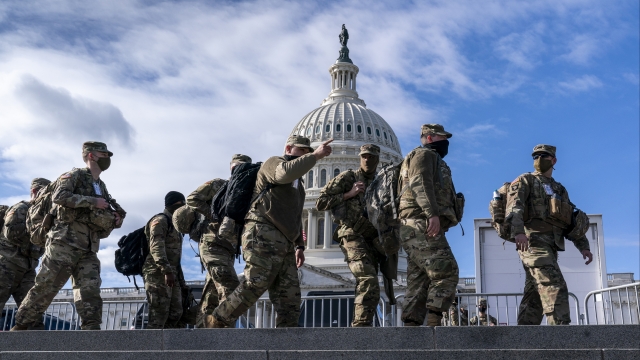 SMS
FBI Vetting All 25,000 Troops In D.C. For Inauguration
By Katherine Biek
By Katherine Biek
January 18, 2021
The military screens its own members on a regular basis, so these FBI checks are really just additional layers of security for this specific event.
SHOW TRANSCRIPT

Tens of thousands of National Guard troops are pouring into Washington, D.C. to help with this week's inauguration, and the FBI is vetting each and every one of them.

A number of the rioters who stormed the U.S. Capitol on January 6 had ties to the military. So this is the federal government's way of proactively trying to sniff out any possible extremist sentiment within the Armed Forces.

"So the question is, Is that all of them or are there others?"Army Secretary Ryan McCarthy said to an AP reporter over the weekend, "So it's clearly something we need to be conscious of inside the entire formation, let alone men and women that may be assigned to this this operation here in the Capitol."

The military screens its own members on a regular basis, so these FBI checks are really just additional layers of security for this specific deployment, the inauguration.

This type of vetting usually involves running names through databases and watch lists, and so far, no troop has been red-flagged, according to McCarthy.

But if anything alarming does end up popping up, such as terrorism related concerns or involvement in previous investigations, then, the chief of the National Guard Bureau says that person would either be dealt with by the chain of command or handed over to law enforcement.