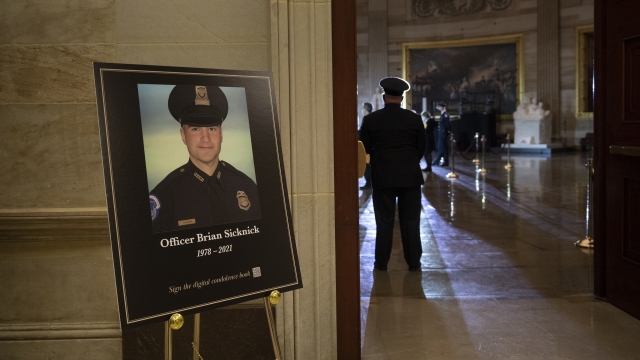 Federal investigators are targeting a suspect they believe may be involved in the death of Officer Brian Sicknick during the storming of the U.S. Capitol on Jan. 6.

The Associated Press, citing two sources, says the FBI has new video evidence that shows a man spraying a suspected chemical agent at Officer Sicknick before he later collapsed and died. It is unclear if the chemical - also sprayed at other Capitol police - is directly tied to Sicknick's death. But the FBI is now seeking to identify and question the man in the video.

This represents a new theory in the case. Investigators first thought the officer died from being hit in the head with a fire extinguisher. But as the investigation has gone on, authorities now believe he ingested a chemical substance. The New York Times reported that authorities are focusing on bear spray or another dangerous toxin.

Sicknick's cause of death is yet to be determined. Capitol police said in a statement Friday: "We are awaiting toxicology results and continue to work with other government agencies regarding the death investigation."