Here's Why We're Talking About The Clinton Foundation ... Again 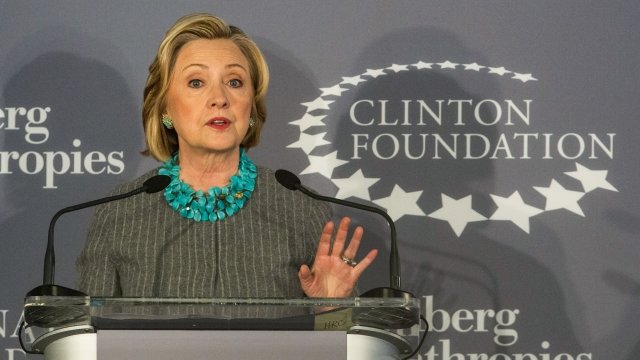 The FBI is investigating the Clinton Foundation again, and this time it has the potential to fuel the president's political fire.

The FBI has reportedly renewed an investigation into the Clinton Foundation, a move that could fuel one of the president's preferred refrains.

"She even deleted 33,000 emails to hide evidence of her crimes. It's impossible to tell where the Clinton Foundation ends and the State Department begins," President Trump said.

The Washington Post says the FBI's field office in Little Rock, Arkansas, is running the probe. The Clinton Foundation has offices there. The bureau is reportedly looking at how donations to the Clinton Foundation might be tied to the way Hillary Clinton conducted diplomacy when she was secretary of state.

Officials tell several news organizations that the bureau has been working on this for months, interviewing people about whether donations were made in exchange for political favors.

Fact-Checking The Wildest Things Said About The Clinton Foundation

Does the Clinton Foundation only give 10 percent of its donations to charity? Did Bill Clinton take half a million for a speech in Moscow?

If this sounds familiar, it's because it is. It was a huge sticking point in the 2016 presidential campaign. Investigators reportedly halted that probe that year to avoid the appearance that investigators were trying to hurt Clinton's presidential prospects with its findings.

The probe could fire up members of the GOP, some of whom asked the Justice Department for a special prosecutor to investigate the Clinton Foundation and then-Secretary Clinton's involvement in a deal that sold part of a uranium company to Russia.

The Justice Department told representatives in November that it was reviewing certain issues GOP members wanted discussed, but didn't confirm or deny an investigation.