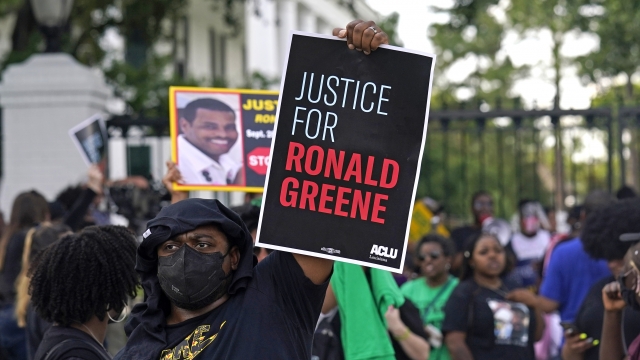 A reexamined autopsy ordered by the FBI in the deadly 2019 arrest of Ronald Greene has rejected the Louisiana State Police claim that a car crash caused his fatal injuries, narrowing prosecutors' focus on the troopers seen on body camera video beating, stunning and dragging the Black motorist.

The unusual second look at what killed Greene confirmed what his family suspected the moment they saw his bruised and battered corpse and his car with only slight damage: A minor crash at the end of a high-speed chase had nothing to do with his death.

The FBI this week received the new forensic review it commissioned in light of the long-buried body camera footage, vehicle black box data and other evidence the state police withheld from Greene's original autopsy. The review, which did not involve another examination of the body, attributes Greene's death to a series of factors, including troopers striking the 49-year-old in the head, restraining him at length and his use of cocaine.

Still unclear was whether the new autopsy would prompt the Union Parish coroner to change the manner of Greene's death from accidental to homicide, which could affect the charges available to state and federal prosecutors.

The new autopsy report comes as federal prosecutors are in the final stages of a two-year civil rights investigation that began looking into Greene's death but has since expanded to examine the beatings of several other Black motorists, and whether top brass obstructed justice to shield troopers from possible prosecution.

Greene's May 10, 2019, death came after he failed to stop for a traffic violation and led troopers on a midnight chase across northern Louisiana at speeds topping 115 mph, ending along a rural roadside near Monroe. State police initially told Greene's family he died after crashing into a tree, an account the Union Parish coroner committed to writing in an official report, which describes Greene's death as a motor vehicle accident and makes no mention of a confrontation with troopers.

After officials refused for more than two years to release the troopers' body camera video, the Associated Press obtained and published it this spring, showing white troopers converging on Greene before he can even get out of his car, repeatedly stunning and punching him as he appears to surrender and repeatedly wails, "I'm your brother! I'm scared! I'm scared!" A trooper can later be seen dragging the heavyset Greene by his ankle shackles and he is left prone and face down in the dirt for more than nine minutes before he eventually goes limp.

Federal investigators are also examining the actions of police commanders, which included pressuring their own detectives to hold off on arresting the trooper who acknowledged hitting Greene in the head with a flashlight and was overheard on his body camera video boasting to a colleague that he "beat the ever-living f--- out of him."

That trooper, Chris Hollingsworth, died last year in a single-vehicle crash hours after he learned he would be fired for his role in the Greene case.

Speaking to investigators shortly before his death, Hollingsworth sought to justify his flashlight strikes on Greene in part because the man "didn't have any apparent injuries" after the crash and "could have done anything once my hold was broke off him."