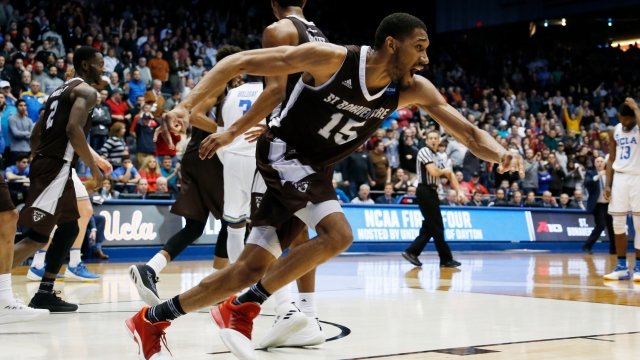 The March Madness tournament is underway, and the FBI is making a cameo.

March Madness is upon us, which means hoops fans are abuzz about buzzer-beaters, bracket-busters and ... the FBI. That last one isn't typical.

Even as the tournament takes place, many of the schools in the bracket are linked to an ongoing FBI investigation concerning paying off players.

It's unclear what the legal ramifications of this investigation will be, but the allegations, if true, would be major violations of NCAA rules. And for these programs, that alone is a really big deal.

The NCAA stands for the National Collegiate Athletic Association. It's the governing body for all the big-time college sporting events in the United States. And its biggest, most important rule is amateurism.

"There's a lot of people who think that if a football team generates a lot of cash that the student-athletes ought to share in that in one way or another, that they ought to be paid employees," NCAA President Mark Emmert told CampusInsiders in 2014. "I just can't imagine why a university would want to do that."

Emmert's been the president of the NCAA since 2010. He has staunchly opposed paying players throughout his time in charge. To him and the NCAA, the players aren't employees, they're "student-athletes."

But on Sept. 26, the FBI arrested 10 men associated with college basketball, including four assistant coaches at top-tier programs. The bureau charged them with bribery and corruption, alleging certain sports agents had bribed players in exchange for signing with their agency down the road and that sportswear companies would use money to funnel recruits to schools they sponsored.

Then on Feb. 23, Yahoo Sports released documents from the FBI's investigation appearing to show that players on at least 20 top-division programs took money from a sports agency, something expressly forbidden by NCAA rules.

These payments vary widely — from a couple free lunches to tens of thousands of dollars. The takeaway, though, isn't about the specific offenses. It's about uncovering an underground culture in the sport that's filled with NCAA rules violations.

Many around the sport say this problem is so ingrained removing it just wouldn't be feasible for the NCAA. This includes Jay Williams, a two-time All-American at Duke who is now an analyst for ESPN.

"I don't think you can ever fix this problem. The street game is way too sophisticated," Williams said on ESPN's "College Gameday" on Feb. 17. "And from somebody who got a chance to work in that environment — it's almost like taxes. You find different loopholes in order to play the game."

There are ways the NCAA can punish schools for breaking the rules. In February, the NCAA wiped out Louisville men's basketball's 2013 national title in response to allegations that a program official provided recruits with strippers and prostitutes.

But the sheer scope of this scandal makes it that much tougher for the NCAA to legislate. It also lends some credibility to what former UCLA star and current Los Angeles Laker Lonzo Ball had to say on the subject.

But that rule change doesn't seem to be on the way any time soon.