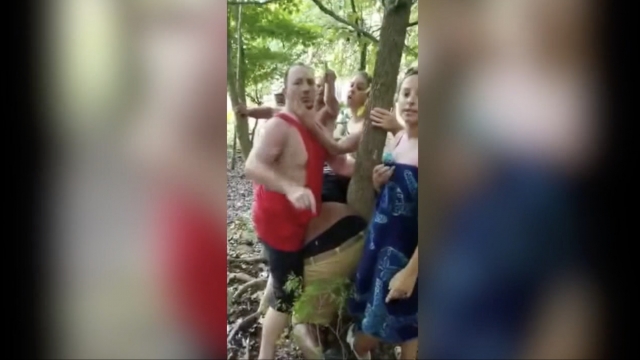 The FBI is investigating after a Black man in Indiana says he was beaten by a group of men who threatened to lynch him.

Vauhxx Booker's lawyer said Tuesday said the FBI is investigating the reported assault as a hate crime, though the AP says there's been no confirmation of that.

"We want this investigated as a hate crime. It was clearly racially motivated," his lawyer said.

"You nappy headed b****. Are you happy about this? What do you want to call me? You with your five White friends."

Booker said he and his friends were trying to get to a public beach near Bloomington, Indiana Saturday. They were blocked by a group of men who said the path they were taking to the public beach was on private property.

The situation escalated, and Booker said the men began holding him against his will against a tree, screamed "white power" and threatened to get a noose. He told Newsy-affiliate WRTV they also pounded his body.

He said: "You could feel the anger and the intent to try and hurt me."

Booker walked away from the incident with a concussion, ripped out hair and abrasions. Police were called but no one was arrested at the scene.

Booker said his life was saved by friends and bystanders who stepped in to confront his reported attackers.

He said: "I had friends and strangers who were willing to put the lives and their bodies on the line ... Without these folks, I would be a hashtag."