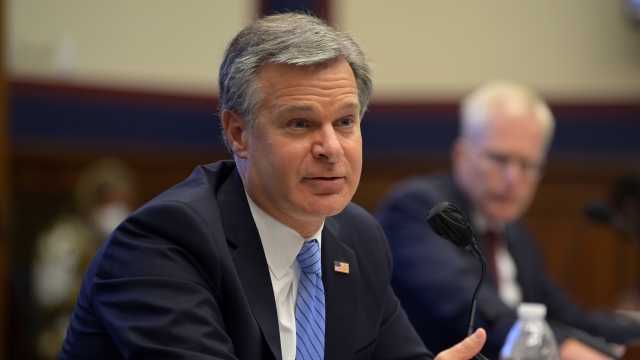 Lauren Magarino: "White supremacists and anti government extremists are mainly responsible for domestic terrorism threats in the U. S. That's according to the head of the FBI. Christopher Wray testified to the House Homeland Security Committee Thursday. He also warned of Russian interference ahead of the election."

FBI Director Christopher Wray: "We certainly have seen very active, very active efforts by the Russians to influence our election in 2020 through what I would call more than malign foreign influence, side of things — social media use of of proxies, state media, online journals, etcetera — an effort to both so divisiveness and discord. And — and I think the intelligence community has assessed this publicly — uh, to primarily to denigrate Vice President Biden and what the Russians see is kind of an anti Russian establishment."

Magarino: "In a New York Times op ed, the president's former director of national intelligence, Dan Coats, said Congress should establish a bipartisan commission to oversee the election and reassure Americans their votes are counted. Coats wrote that failing to protect this election won't help Democrats or Republicans. Rather, it will be a win for the leaders of Russia, China and Iran. Newsy national security reporter Sasha Ingber joins us now. Sasha, that hearing with FBI Director Christopher Wray covered a lot of ground. What stood out to you?"

Sasha Ingber: "Well, Lauren, what really stood out to me was how FBI Director Chris Wray seemed to divert from the rhetoric that we've heard from President Trump. No, not only in discussing Russian interference and efforts to undermine Vice President Biden, Chris Wray also discussed how he has not seen a coordinated effort of voter fraud in a major election. Now, of course, President Trump has said time and time again that mail-in voting opens the door to massive fraud. Another thing, President Trump, Republicans, they point out that Antifa is a leftist movement; they call it a domestic terrorist group and that it poses a grave national security risk. Now, Wray did say that there are problems, ideologies not just right or left. But he did emphasize when pushed, that racially motivated domestic extremism is where he is most concerned. He said that white supremacists were the largest bucket within that group and essentially put this on par with uh with homegrown jihadism. Now, where he seemed to please Republicans was when he was discussing the warrants for surveillance of Trump campaign adviser in 2016. In that moment, he said that what happened was unacceptable and that he had implemented about 40 changes. Many of the senior people working on that effort — excuse me — or either let go or had retired."

Magarino: "The acting head of Homeland Security, Chad Wolf, he was supposed to be there as well. Why wasn't he?"

Ingber: "Well, you know, Chad Wolf was supposed to be there. And as we have seen from many Trump administration officials, they defied a subpoena. In this instance, the Department of Homeland Security had said that because Chad Wolf is the acting secretary, he is now facing a nomination in the Senate. Therefore, he isn't able to sit down with this committee in the House to testify. That is an argument that Democrats just did not buy, with Chairman Bennie Thompson, a Democrat, saying, essentially that Chad Wolf was compromising national security to benefit President Trump. Now the ranking member, Mike Rogers, who is a Republican. He said that he was also disappointed in the fact that Chad Wolf was absent. But he accused the Democrats of using this as a political stunt. Now the Department of Homeland Security has many questions to answer especially Chad Wolf number one. The issue of the allegations, at least, that some immigrant women were being forcibly sterilized. And, also, there is a whistleblower from the Department of Homeland Security who has accused senior officials of stifling Russian interference information and also inflating numbers at the border of terrorists or suspected terrorists, Lauren. Those are lots of questions that we just don't have answers to right now."