FBI Director Promises To Learn From The Inspector General's Report 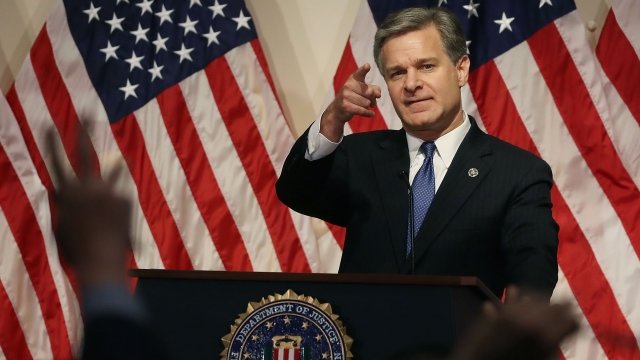 Christopher Wray promised increased training to ensure the mistakes made during previous investigations are not repeated.

"Because change starts at the top — including right here with me — we're going to begin by requiring all our senior executives, from around the world, to convene for in-depth training on the lessons we should learn from today's report," Wray said during a press conference Thursday.

A report released Thursday details the results of an investigation into the FBI's probe into Hillary Clinton's emails.

"The report did not find any evidence of political bias or improper consideration actually impacting the investigation under review. ... Nothing in the report impugns the integrity of our workforce as a whole, or the FBI as an institution," Wray said.

But the report does note some mistakes were made. One focus of the inspector general's report was James Comey's press conference saying Clinton didn't do anything criminal. The report called that announcement "extraordinary and insubordinate."

Wray already took steps to try and prevent that from happening again. In November, he implemented new rules around speaking to the media — rules he plans to emphasize again.

Wray said going forward, the FBI will ensure "that we follow all DOJ policies about public statements on ongoing investigations and uncharged conduct."

Wray also said he plans to hold employees accountable for their actions, including those detailed in the report.