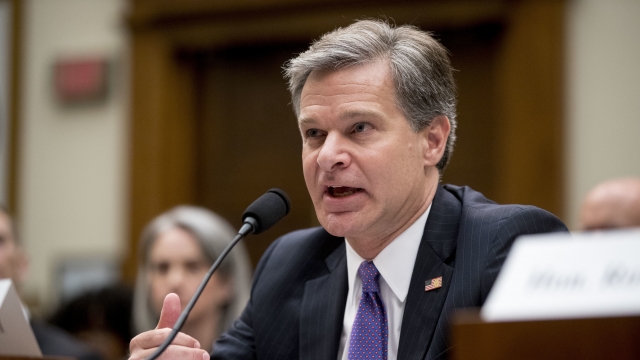 The head of the FBI has accused China of coercing Chinese-born critics living in the U.S. to return home.

FBI Director Christopher Wray says U.S. citizens are among those targeted as Beijing works to silence critics of its political and human rights issues.

He says Chinese authorities have gone as far as to threaten and even arrest the families of those who refuse to return to China.

Wray also says almost half of the nearly 5,000 active FBI counterintelligence cases are related to China and warns Beijing is attempting to replace the U.S. as a world leader.

"China is engaged in a whole of state effort to become the world's only superpower by any means necessary. ... And over the past decade, we've seen economic espionage cases with a link to China increased by approximately 1,300%. The stakes could not be higher, and the potential economic harm to American businesses and the economy as a whole almost defies calculation."

The deputy director of the Chinese Ministry of Foreign Affairs says Wray's claims are a political scheme to deceive citizens and conceal America's own problems.

Wray said China's threats do not specifically target the presidential election in November but that Chinese preferences could introduce some implications.