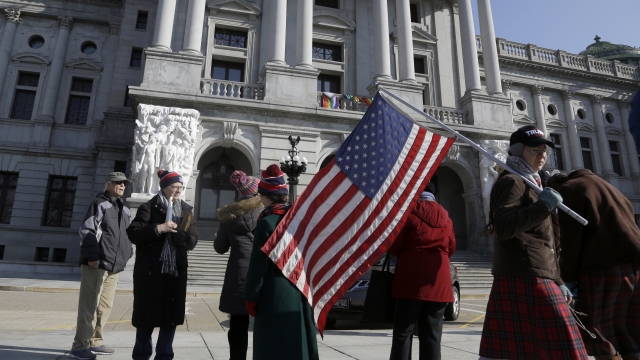 SMS
Leaked FBI Memo Shows Armed Protests Planned In All 50 States
By Sasha Ingber
By Sasha Ingber
January 12, 2021
The alert, first reported by ABC News, has prompted states like Michigan to step up security around their statehouses.
SHOW TRANSCRIPT

A stark warning from leaked FBI memos... saying armed protests are being planned in all 50 states and the U.S. Capitol starting this week, through Inauguration Day.

And there’s more. In a December report, an FBI alert that members of the far right Boogaloo Movement in Michigan and Minnesota have been scouting locations to escape potential violence, assessing law enforcement sniper locations, using duct tape to appear like police and cause confusion, and discussing blowing up buildings.

Just who are the Boogaloo? They’re a loose, far-right group that includes neo-Nazis and white nationalists, calling for armed insurrection against the government.

The word "boogaloo" is a slang term they use for a coming civil war, even though it was originally a genre of dance and music.

The term gained traction in 2019 among pro-gun activists who found each other online — and today some members have been charged in connection with violence and plotting attacks.

Last week’s fatal takeover of the Capitol showed that extremist threats must be taken seriously, after months of warning from experts. Among the states preparing for chaos, a spokesperson for the Michigan state police tells Newsy they’ve stepped up security at the Capitol in Lansing, but they won’t share details "so as not to provide an advantage to agitators."