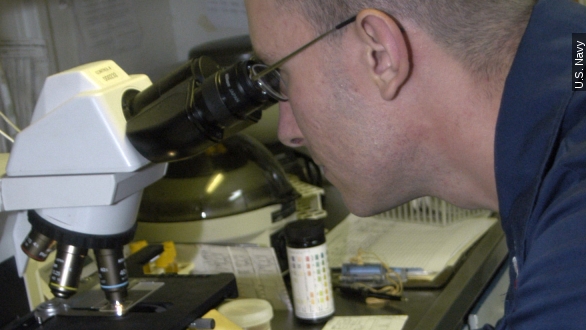 SMS
FBI Acknowledges Widespread Flaws In Forensic Hair Analysis
By Evan Thomas
By Evan Thomas
April 19, 2015
The flawed analysis and testimony has contributed to at least 32 death-penalty cases reviewed so far, and about 1,200 more cases will be assessed.
SHOW TRANSCRIPT

The FBI has admitted to widespread flawed testimony in criminal cases involving forensic analysis of hair samples, spanning more than two decades leading up to the year 2000.

In a report detailed in The Washington Post, investigators found of the 28 examiners at the FBI's microscopic hair comparison unit, all but two "overstated forensic matches in ways that favored prosecutors" in more than 95 percent of trials reviewed to date.

So far, the review has identified 32 death-penalty cases that involved flawed analysis and testimony.

This investigation started in 2012, after an earlier Washington Post report found the FBI hadn't thoroughly reviewed the forensic work of its hair and fibers unit.

"They're actually reaching out to the prosecutors and saying 'Here's a case where we may have either testified beyond what the science could support, or gone beyond what the guidelines on what an FBI expert should say,'" former FBI assistant director John Miller told CBS in 2012.

The investigation found pattern-based forensics, such as analysis of hair and bite marks, contributed to a good portion of cases that were later exonerated on DNA evidence. (Video via The New York Times)

Hair comparison specifically was established as forensic science in the 1950s. According to earlier Washington Post reports, the FBI admitted it was a "subjective" practice in 1974.

And a 2009 report from the National Academy of Sciences found "no forensic method has been rigorously shown to have the capacity to consistently, and with a high degree of certainty, demonstrate a connection between evidence and a specific individual or source." The report called a number of forensic methods into question: everything from fingerprinting and hair testing to handwriting and bite marks.

In a statement from the FBI published Saturday by The Washington Post, the agency said, it's "committed to ensuring the accuracy of future hair analysis, as well as the application of all disciplines of forensic science."

As of mid-April, officials said there were still some 1,200 cases left to analyze.

This video includes images from the U.S. Navy and Erik Drost / CC BY 2.0.