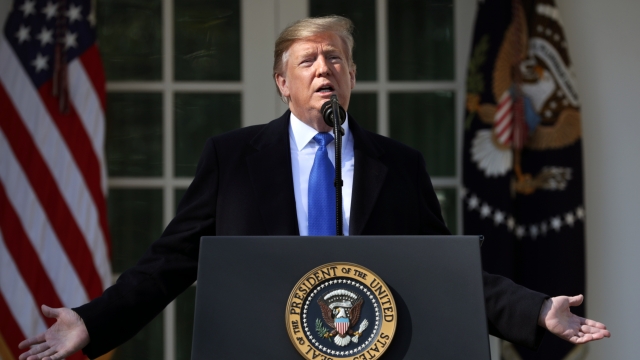 SMS
Father Of Alabama Woman Who Joined ISIS Sues Trump Administration
By Katherine Biek
By Katherine Biek
February 22, 2019
Earlier this week, Secretary of State Mike Pompeo declared that Hoda Muthana was not a U.S. citizen and therefore not allowed back in the country.
SHOW TRANSCRIPT

The father of an Alabama woman who joined ISIS years ago is suing the Trump administration in an effort to bring her back home to the U.S.

Earlier this week, Secretary of State Mike Pompeo declared that Hoda Muthana was not a U.S. citizen and therefore not allowed back in the country.

Her father's lawsuit claims that the Trump administration's move is "unconstitutionally robbing [Muthana and her 18-month-old son] of their rights as United States citizens."

Muthana's family claims she was born in New Jersey. But the question about her citizenship at least partly revolves around the timing of her father's employment as a Yemeni diplomat.

Now, in most cases, children born in the U.S. are automatically granted citizenship. But children of accredited foreign diplomatic officers are an exception under the Immigration and Nationality Act, since they aren't subject to U.S. law.

Pompeo told NBC News that her father's diplomatic status at the time of her birth means Muthana was never a U.S. citizen. But Muthana's father claims he stopped working as a diplomat months before she was born.

In a letter obtained by CNN, Muthana wrote that she was angry and arrogant when she left the U.S. to go to Syria five years ago, and that witnessing war conditions and the deaths of two of her husbands has changed her mind.

The lawsuit says officials first determined that Muthana was not a U.S. citizen in 2016 when President Barack Obama was in office. Her passport was revoked at that time.