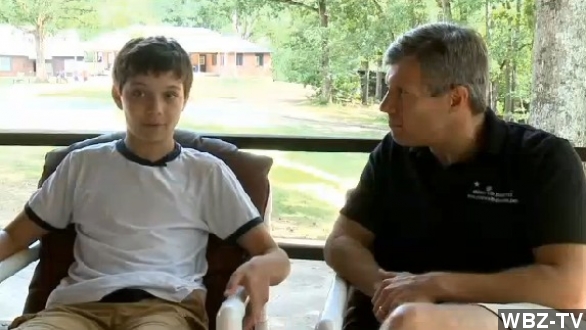 By Christine Slusser
June 16, 2014
A father has dedicated his life to helping his son, who was diagnosed with Type I diabetes as an infant. He has now developed a "bionic pancreas."
SHOW TRANSCRIPT

An alarm clock goes off and he jumps up to check on his son, David, with Type I Diabetes. (Via Flickr / Alan Cleaver​)

And now, Damiano has developed something that may let him sleep through that alarm, especially as his son is approaching college age.

"He's 14 years old now and soon after he was diagnosed I realized that my background as mechanical engineering, applied mathematics, applied mechanics and I realized I had a certain skill set that leant itself to building a technology." (Via YouTube / Glu Staff)

"That's where the bionic pancreas comes in. Using a continuous glucose monitor, blood sugar levels are checked every five minutes.​"

"That information is transmitted to a special iPhone app."

And that app figures out what the body needs — and then can give a shot of insulin or glucagon. It's delivered through an injection site. (Flickr / Melissa J | de Fatto)

"The bionic device has three parts. Two cell phone sized pumps ... and an iPhone wired to a continuous glucose monitor. Three small needles go under the skin, usually in the belly, to connect patients to the components." (Via NECN)

USA Today reports the bionic pancreas has been tested, and the results have been good. Damiano is hoping for FDA approval before his son leaves for college.

"People with type 1 diabetes who used a 'bionic' pancreas were better able to control their blood sugar levels than those who monitored their levels manually, a small new study shows."

Keeping blood sugar levels where they need to be is a delicate balance. (Via Flickr / Amanda Westmont)

WebMD reports people with Type I diabetes, which has also been called juvenile diabetes, need to make sure their blood sugar isn't too high OR too low. Both can lead to a series of complications like eye and kidney damage, etc.

​Damiano's son David was diagnosed with diabetes before he was a year old, and as an associate professor of biomedical engineering at Boston University, Damiano focused on helping his son. NPR reports it has been successful so far:

"...Damiano has gotten approval to launch a new round of testing. Dozens of adult and adolescent volunteers will use the system on their own for 11 days."

And according to NPR, the first of those volunteers have already started. David has faith in his dad, telling NPR he has just known his entire life his father was going to have the bionic pancreas ready by the time he leaves for college in 2017.