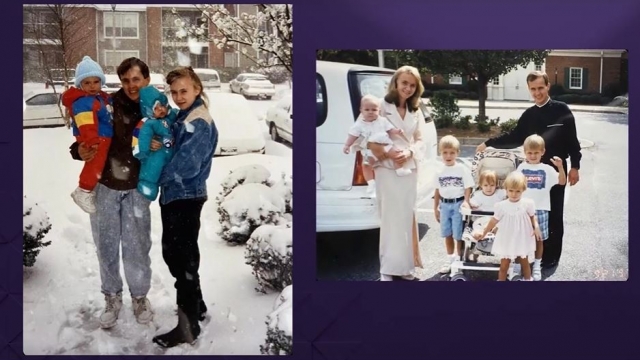 SMS
Father And Son Reflect On Ukraine's History Under Soviet Union Control
By Maura Sirianni
By Maura Sirianni
March 13, 2022
Throughout much of history, the Ukrainian people have suffered under ruthless tyrants.

Like a man-made famine engineered by the Soviet government and Joseph Stalin, which killed millions of innocent people in the 1930s ...

Today, it's aggression from Vladimir Putin, which bears a striking resemblance.

Peter Mospanyuk grew up in modern-day Rivne, Ukraine — back when the Soviet Union controlled it.

"When I'd go to school, like, elementary school, you'd need to have a sign showing that you are part of the Communist Party. I said 'no' and I had teachers' persecution," Mospanyuk said.

Mospanyuk moved to the United States in 1991 to create a better life for his family.

"If my father wouldn't have fled Ukraine in 1991, I would be there alongside everyone taking up arms and trying to defend the nation," said James Mospanyuk.

James is one of seven children, his entire family devastated by what the Ukrainian people have had to endure at the hands of  Putin and Russian forces.

"It's something I'm thinking about constantly, every morning I get up and pray and listen to Ukrainian music and ground myself on what's going on," said James Mospanyuk.

Now, three decades after gaining its independence from the Soviet Union, Ukraine is once again fighting for freedom, and the Ukrainian people know firsthand what Russia is capable of. James says his grandfather was targeted by the KGB for running an underground church.

"It was just a consistent pressure. They'd just try to beat you down and try to demotivate you from trying to experience freedoms, life and practicing religion. It was a lot of fearmongering, and that's what this regime is doing," said James Mospanyuk.

For Peter, it's painful to see the bombing and the destruction of his homeland, history the Ukrainian people are desperately trying to stop from repeating itself.

"So, we had to go through a lot, and we know what Communism is and what Socialism is — and we don't want it to come back," said Peter Mospanyuk.

Generations of Ukrainians have fought to preserve their identity and freedom. James Mospanyuk says that's why he wants to educate people and encourage them to stand with Ukraine.