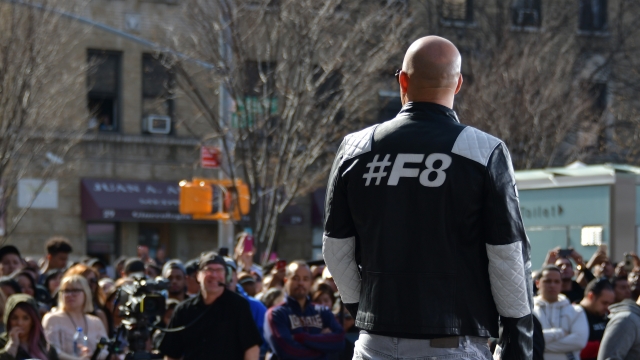 SMS
The 'Fast And Furious' Franchise Makes $1 Billion. Again.
By Jamal Andress
By Jamal Andress
April 30, 2017
There are now 30 movies in the billion-dollar box office club, but none of them relied on the foreign box office as heavily as "Fate of the Furious."
SHOW TRANSCRIPT

Well, you know what they say: The family that fights submarines with muscle cars together makes a billion worldwide box office bucks together. Again.

Holding the top spot for the third week in a row is "Fate of the Furious," bringing in an estimated $19 million domestically. But the big news here is obviously the $1 billion milestone "Fate of the Furious" and Universal Pictures has crossed and how they crossed it.

There are now 30 movies in the billion-dollar box office club, but none of them relied on the foreign box office as heavily as "Fate of the Furious."

More than 80 percent of the $1 billion "Fast 8" has made so far came from overseas. In China alone, Dom and company have racked up $319 million.

But, "Guardians of the Galaxy Vol. 2" will most likely boot "Fate" from the spotlight in T minus six days.

Taking the No. 2 spot is a surprising rom-com hit that isn't even in every movie theater across the country. "How to Be a Latin Lover" earned an estimated $12 million and is only in about 1,100 theaters in the U.S.

As opposed to the Tom Hanks-led, technology may kill us, "Black Mirror" impostor "The Circle," which is playing in more than 3,100 theaters across the country. Speaking of "The Circle," it's not No. 3.

Taking the No. 3 spot this week is a Bollywood hit that's in only 425 movie theaters in the U.S. "Baahubali 2: The Conclusion" brought in an estimated $10 million domestically this weekend.

It pushed "The Circle" out of the top three and into box office bomb territory.

As for next week, "Guardians of the Galaxy Vol. 2" will bring us the most adorable character Marvel has on its roster — for two full hours.