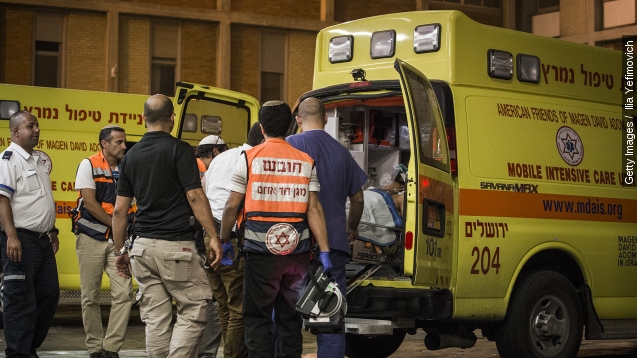 A shootout at an Israeli bus station is the latest in a string of attacks which have led to a security crackdown.

An attack at an Israeli bus station left eleven people injured and two dead, including the attacker.

Police told The Times of Israel an unknown assailant fatally stabbed an Israel Defense Forces soldier and stole his weapon. The attacker then reportedly used it to shoot at passengers in the bus terminal before being gunned down by police.

This is the latest in a string of violent incidents in Israel. There were seven reported stabbings or attempted stabbings in the country over the weekend, with many linked to Palestinian terrorists. (Video via CNN)

Several cities in Israel, including Tel Aviv, have responded by banning Arab workers from school grounds while children are present, a move that's being called racist by a party representing Israel's Arab minority.

And Sunday, Israel's cabinet voted to expand its stop-and-frisk law, giving police the right to search anyone who is in a place prone to violence if there’s reason to think that person might use a weapon.

Israeli Prime Minister Benjamin Netanyahu is scheduled to meet with Secretary of State John Kerry this week to discuss the situation.