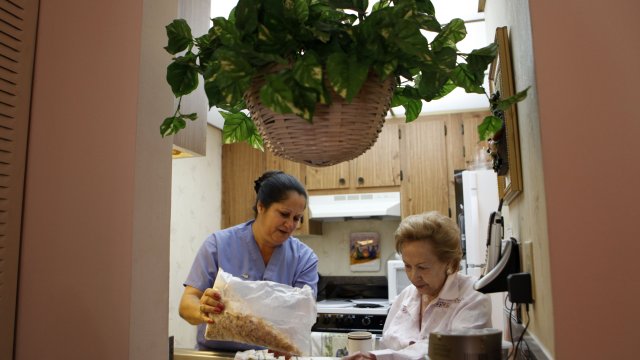 International Women's Day is this Sunday. It's a day to commemorate the gains made by women around the world, including in business.

In the U.S., women now narrowly outnumber men in the workforce.

“Women are thriving in the Trump economy,” Ivanka Trump said.

And the sectors projected to grow the fastest, like health care, are ones that are dominated by female workers. There’s just one problem.

“They tend to be employed in the lower-paying jobs, even within these sectors,” said Aparna Mathur, labor expert at the American Enterprise Institute.

It’s not the number of doctors and nurses that’s surging. It’s home health aides and personal care aides, both of which have a median pay of around $24,000 a year. That's about half the average salary in the U.S.

“That tells me this is not necessarily a career-improving job for them,” Mathur said. “It’s positions women tend to pick up when other positions are not available.”

These jobs are important, especially as our population ages. So why is it that they’re so low-paying?

“It could be that there is a huge supply of workers who are willing to work these jobs. There’s also high rates of turnover — a lot of people come in and leave and move on to something better,” Mathur said.

Mathur also points out the skill requirements for these jobs are lower, which can make them easier to obtain. Since these recent gains for women are in low-paying positions, she warns that we should be cautious about celebrating anything just yet.

“If you look at the broad landscape of how women are doing, I think we still have a long way to go,” Mathur said.

But she does see a silver lining in the numbers — in particular, the growing demand for stronger policies on paid leave and affordable child care.

“That’s a natural outgrowth of the fact that women are now 50% of the workforce,” Mathur said.