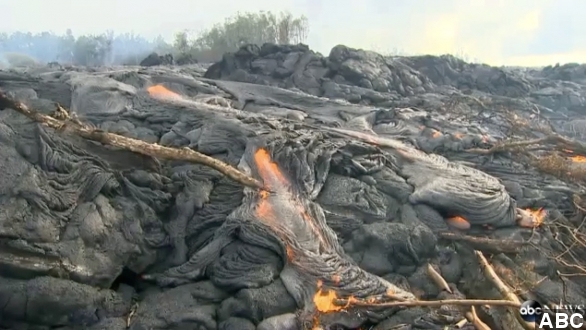 By Katherine Biek
October 24, 2014
Lava from the Kilauea volcano on Hawaii's Big Island has accelerated as it travels toward a town called Pahoa.
SHOW TRANSCRIPT

A lava flow that's been steadily getting closer and closer to a town on Hawaii's Big Island could potentially become a much larger threat.

CLAYTON SANDELL FOR ABC: "This came from the Kilauea volcano. This particular lava flow started on June 27. And it's traveled about 11 miles so far."

The rate of lava flow has accelerated tremendously in recent days, as evidenced by this alert issued Thursday by the Hawaii County Civil Defense.

"This morning's assessment shows that the narrow finger that was advancing along the south edge of the flow has advanced approximately 425 yards since yesterday."

That's a little more than the length of four football fields.

The agency also said the lava was within 0.3 miles of a street in Pahoa near the town's transfer station.

But the Honolulu Star-Advertiser is reporting officials said the lava "is not an immediate threat to homes at this time." Therefore, no evacuations have been ordered.

This is most likely because burning activity has been limited, according to KHNL. There's also no threat of brush fire at this time.

Still, authorities aren't just waiting around for the lava to close in. ABC says they're "preparing for the inevitable" by creating emergency roads.

Kilauea first began erupting in January 1983, and since then, lava has steadily flowed out of it at different points.

The U.S. Geological Survey discovered by the end of 2012, lava from the volcano had covered 48.4 square miles and created about 500 new acres of land when it hardened.

ABC reports residents of Pahoa will be given three days' notice to leave if the lava keeps moving on its current path. In the meantime, officials are hoping the lava will start to move in another direction.