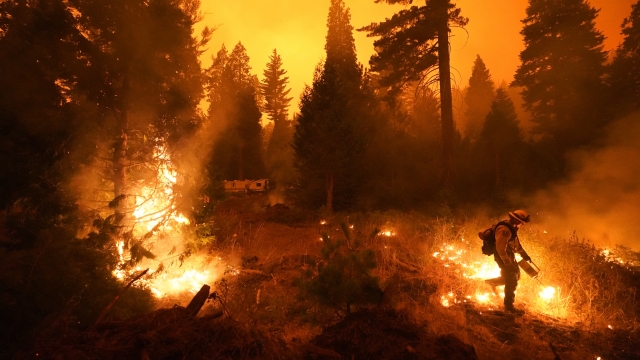 Lauren Magarino: "There is no question that this year's wildfire season in California is unprecedented, with roughly 3.7 million acres burned so far. And it's not even close to being over. Newsy's Katherine Biek joins us. Katherine — a wildfire sparked this year has just set a new record in the state, right?"

Katherine Biek: "Yes, we're talking about the Creek Fire, Lauren. It's currently burning in Central California and now holds the title of the largest single fire in California, having scorched close to 290,000 acres. That distinction is important, though single fire. It means that the Creek Fire started out in the beginning of September as one blaze. Now that's unlike all of these complex fires you keep hearing about. Those start off as multiple, smaller blazes that grow together over time or are burning close enough that officials just count them all together. So you're going to expect those kinds of fires to cover a vast amount of acreage. In fact, five of the top six wildfires in California history have started in the last 90 days. All the fires you're seeing come up on your screen right now are from 2020 except for number two. When you put those five 2020 fires together, they burned nearly 2.4 million acres, which is roughly three times the size of Rhode Island, Lauren."

Magarino: "I mean, it's just crazy to A -- see the list-- and B-- to hear that comparison to Rhode Island. I mean, it really puts things in perspective as to how massive these wildfires are, and there are so many of them. So with all of them burning, I mean, it's thick smoke in the air, is it just becoming a part of life for residents?"

Biek: "It's certainly looking that way. There have been small breaks in air quality here and there, thanks to some rain. But that thick haze from wildfire smoke is really settling in. This, of course, causes harm to people's health. We've talked before about how poor air quality can increase a person's risk of certain infections. But that smoke is also having a dastardly effect on California's economy, especially all of its vineyards. Growers are trying to figure out right now if they can salvage any sort of a vintage from this year, because if any damaged grapes were to make it into a wine, that wine would be unsellable. No question about it. Because it would just taste so bitter and so ashy. Lauren."

Magarino: "Alright. Newsy is Katherine Biek. Thank you very much."