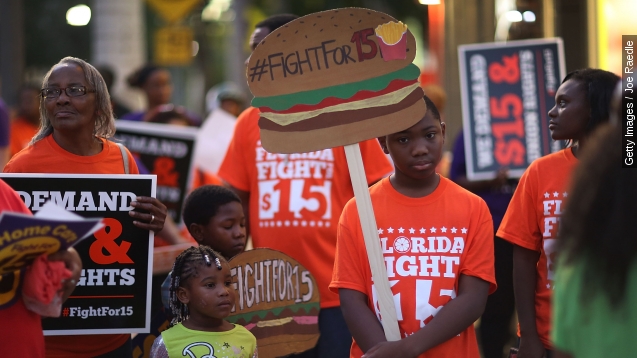 SMS
Fast-Food Workers Nationwide Strike For $15 Minimum Wage
By Ben Lawson
By Ben Lawson
November 10, 2015
In the run-up to the 2016 presidential election, low-wage workers are showing their political power in hopes of a minimum-wage increase.
SHOW TRANSCRIPT

Fast-food workers in more than 270 cities staged a walkout Tuesday in demand of a $15 minimum wage.

The demands from the "Fight for 15" movement are far from new, but the walkout is being called the largest effort yet.

The battle for a $15 minimum wage in the fast-food industry was already won in New York, but local workers are still protesting in solidarity. This time around, the demonstrations aren't limited to food service, but include other low-wage industries like in-home health care, child care and maintenance. (Video via WPIX)

And now the protesters are trying to make it an election issue, with a demonstration planned  outside the Republican debate in Milwaukee Tuesday night. (Video via KNBC)

Low-wage workers could be a powerful political force — 42 percent of the workforce makes less than $15 an hour, with the federal minimum wage currently set at $7.25. (Video via KTVU)

An October poll showed that 65 percent of those workers would be more likely to vote if a candidate supported a $15 minimum wage and unionization.

And presidential candidates are taking notice. Both Hillary Clinton and Bernie Sanders tweeted support for the campaign.