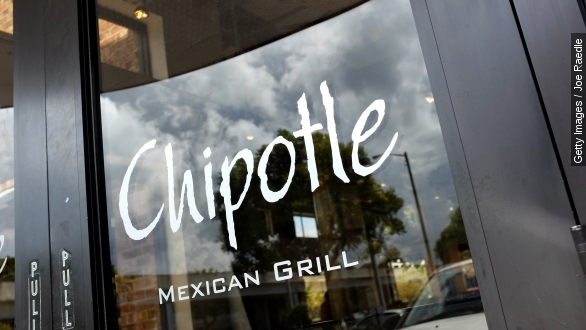 The face of fast-casual just kept putting out impressive numbers Tuesday. Impressive, that is, unless you're an investor.

Compare that to Yum! Brands — which owns Taco Bell, KFC and Pizza Hut. The much larger company saw sales drop 4 percent in the first quarter, and profits dropped 9 percent. (Video via Taco Bell)

The earnings report underscored the massive movement of Americans to fast-casual dining. Chipotle hangs its hat on ingredients from sustainable operations, often pointing to larger operations as less desirable or simply not letting you know where your food comes from. (Video via Chipotle)

But despite what most companies would consider an incredible quarter, it still wasn't up to investor expectations, and the company's stock price Wednesday was down $47 a share.

"For Chipotle, the expectations couldn't have been higher," Jack Mohr of The Street told CNBC. "I mean, that's the problem. It's such an interesting stock. Everyone wants to own it, but it's so tough to buy for these exact reasons."

Yum! Brands, meanwhile, has an aggressive marketing plan for all of its brands. Taco Bell is trying to steal McDonald's breakfast market share, KFC continues to make not-so-subtle digs at Subway trying to win the lunch war and Pizza Hut completely revamped its menu offerings late last year to rejuvenate the franchise.

And despite the drop in profits, Yum! didn't do nearly as poorly as investors expected. So, unlike Chipotle, its stock price after the earnings report rose a few dollars per share.