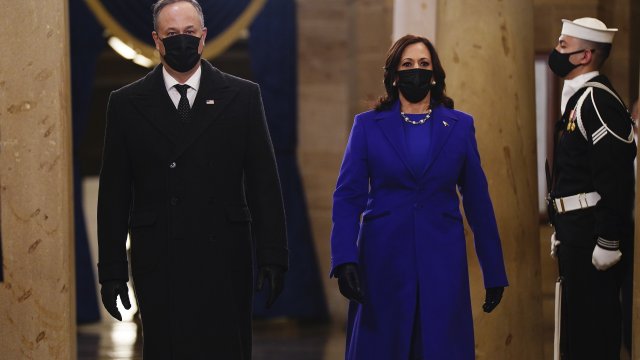 SMS
Fashion Diplomacy At Presidential Inauguration
By Newsy Staff
By Newsy Staff
January 21, 2021
the color purple represents bipartisanship but also one of the official colors of the women's suffrage movement.
SHOW TRANSCRIPT

And while most lawmakers and other attendees at yesterday's events did speak, many conveyed a message with their ward robes. Katherine biek is back to walk us through the finer points of yesterday's fashion diplomacy. Katherine, good morning. What big trends to see we on the inauguration stage yesterday?

Well, the big one of the the color purple, Alex. We saw many women wearing various shades including Vice President Kamala Harris, former

Secretary of State Hillary Clinton, and former First Ladies, Michelle Obama and Laura Bush. The latter wore kind of a periwinkle color, at the very lease the color purple represents bipartisanship but also one of the official colors of the women's suffrage movement. Another trend we saw was women wearing pearl jewelry and this was a nod to Harris who had made a pearl necklace her signature look over the course of her career, the pearls have a special meaning to her. In college she was a part of the Alpha Kappa Alpha Sorority whose members wear pearls as a show of unity and sisterhood. And a social media encouraged thousands of Americans to wear pearls yesterday in honor of the VP.