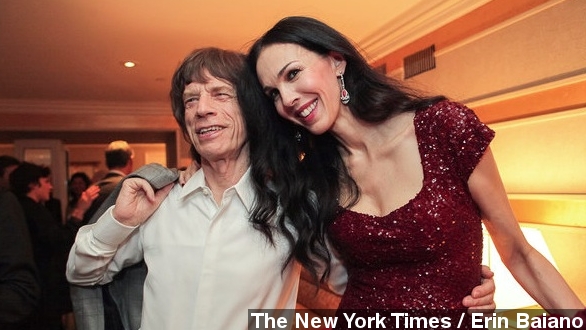 L'Wren Scott has reportedly committed suicide. The model and fashion designer was also the longtime girifriend of Mick Jagger.

Scott was in her late 40s. She and the 70-year-old Rolling Stones frontman had been involved for more than a decade — reportedly since 2001. (Via YouTube / L'Wren Scott)

The New York Daily News reports Scott was found hanging by a scarf in her apartment on 11th Avenue. Her assistant found her after getting a text asking her to come over.

ABC spoke with a spokesperson for Jagger, who says he is "completely shocked and devastated by the news." He is currently on tour in Australia.

According to the New York Post, Scott did not leave behind a note of any kind, and there were no signs of foul play.

So far the only indication of anything out of the ordinary in Scott's life was that she had canceled her recent show for London Fashion Week, citing production delays. (Via The Telegraph)

Scott was raised in Utah and was discovered by famous fashion photographer Bruce Weber. After a successful modeling career, she took to designing, and had styled Nicole Kidman, Amy Adams, first lady Michelle Obama and many more. (Via The Financial Times)

An official cause of death has not been announced.