Carolina Farmers Race To Save Crops, Farmland Before Florence Hits 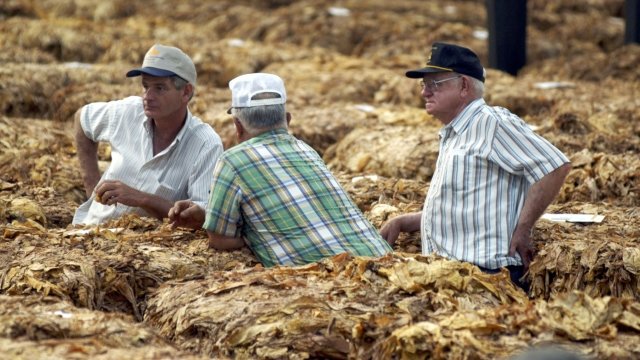 By Tyler Adkisson
September 13, 2018
In the past, hurricanes have done as much as $114 million in damage to tobacco crops. Heavy rains may also spell problems for hog farmers.
SHOW TRANSCRIPT

Hurricane Florence is projected to make landfall in an agriculture-heavy part of North Carolina, and farmers are racing to harvest crops and shelter livestock before the storm hits. A majority of the state's crops are still in the field, and if they're not picked, Florence could cause drastic economic damage.

That's because 17 percent of North Carolina's total income comes from farming. It's the U.S.'s biggest tobacco producer — accounting for 60 percent of exports — and it raises roughly 10 percent of the country's hogs, chickens and turkeys.

Tobacco plants are particularly vulnerable to hurricanes because high-speed winds can tear leaves and heavy rainfalls can drown the plants. In 2011, Hurricane Irene caused at least $114 million in damage to tobacco crops — about 20 percent of the state's total revenue for the plant.

Hurricane Florence is also expected to move over an area full of hog farms, many of which contain open air lagoons that collect pig excrement. If heavy rain overflows these pools, it can carry waste into local rivers.

For now, tobacco farmers are saving what they can of their crop by harvesting early — but losses could reach as high as $300 million. Hog farmers are draining manure pools by using it as fertilizer on local fields. Experts say when the lagoons are empty, they should be able to hold up to three feet of rain.