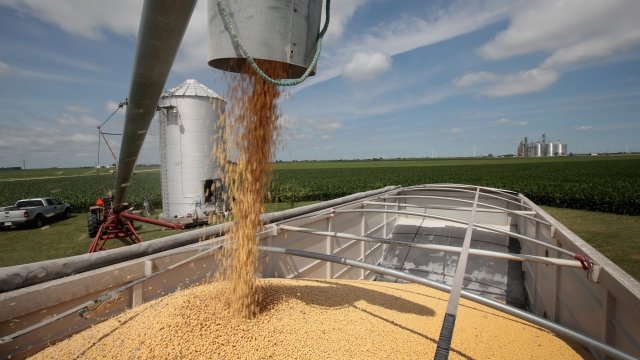 SMS
Farmers Could Bear Brunt Of US-China Trade War
By Jake Jones
By Jake Jones
July 6, 2018
Agriculture is a big business in Midwestern states, and China is one of their biggest customers.
SHOW TRANSCRIPT

Now that China levied retaliatory tariffs against the U.S., analysts fear American farmers will bear the brunt of the trade war.

Beijing imposed import duties on $34 billion worth American goods after the U.S. implemented tariffs of the same value on goods coming from China.

President Donald Trump's import taxes seemed to focus on products that use metals and alloys. The U.S. imposed tariffs on washing machines, solar panels and airplane parts as well as certain types of ships, vehicles and boats.

NBC reports the trade dispute could cost farmers more than $100 million a year in Midwest states like Missouri. Agriculture is a big business there, and China is one of their biggest customers.