Far-Right Support For Vladimir Putin Is Cracking With Ukraine Invasion 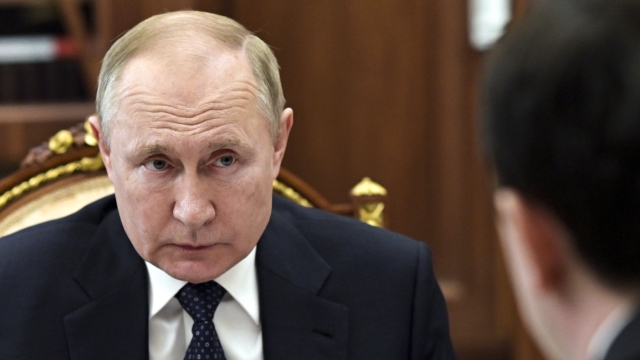 SMS
Far-Right Support For Vladimir Putin Is Cracking With Ukraine Invasion
By Mark Greenblatt
By Mark Greenblatt
March 29, 2022
Even some Putin-fan politicians have changed their stance, with one French far-right leader calling Putin's aggression "eminently condemnable."

A propaganda video showing a pro-Russian celebration erupting in Serbia is being spread by the Russian Imperial Movement (RIM) — a White supremacist group rooting on the Russian invasion in Ukraine and supporting the call for a Russia controlled by White Christians.

Under Russian President Vladimir Putin, RIM told Newsy it is allowed to openly operate military-style training camps, used to train hundreds of volunteers to fight with Russia when it invaded Ukraine back in 2014.

The U.S. State Department designated RIM a terrorist group in 2020.

Now, the group is openly encouraging White nationalist allies throughout Europe to support what Russia calls its "special military operation.

"One of the concerns is that Ukraine could become to the far right what Syria was to jihadists — that if this conflict goes on, people will be drawn to the conflict," Daveed Gartenstein-Ross said.

Gartenstein-Ross is a domestic extremism expert for the Foundation for Defense of Democracies, a national security think tank with advisers who served both Republican and Democratic administrations. He was also a lead author of the Department of Homeland Security's 2019 counterterrorism strategy.

"There will be some people who are disenchanted by this bloody conflict and want no part of it," Gartenstein-Ross said. "There will be others who are completely captured by one of the narratives, which provides an opportunity to recruit around either pro-Ukrainian or pro-Russian stances."

Globally, many White nationalists are staying neutral, with a popular meme making its way around the internet to put an end to what they call “brother wars,” where White people kill other White people.

But in a twist, many White supremacists around the world are questioning Putin’s aggression, taking Putin’s self-proclaimed push to "de-nazify" Ukraine as an attack on them, too.

Even some far-right politicians and Putin fans have done an about-face.

Gartenstein-Ross says the threat level in the U.S. is rising.

"You have a perfect storm right now," he said. "Gas prices have spiked. You have lingering supply chain issues. If you're an extremist looking for opportunities, looking to spur people on to carry out acts of violence, all the ingredients are there for this cocktail. All you have to do is mix it."