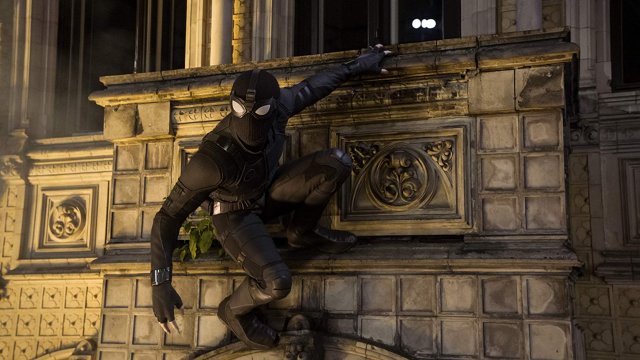 SMS
'Far From Home' Becomes Third Highest-Grossing Spidey Flick Ever
By Jamal Andress
By Jamal Andress
July 15, 2019
Analysts expect "Far From Home" to hit the billion dollar mark by summer's end — becoming the ninth movie in the Marvel Cinematic Universe to do so.
SHOW TRANSCRIPT

Taking the No. 1 spot for the second weekend in a row is "Spider-Man: Far From Home" bringing in an estimated $45 million. That's more box office dollars than the next three films combined. So much for superhero fatigue.

On the long list of Spidey feature films "Far From Home" is already third in terms of worldwide ticket sales — falling behind "Spider-Man 3" and "Homecoming."

But with $572 million worth of foreign ticket sales, "Far From Home" is now the highest grossing Spider-Man movie internationally. The Chinese box office alone is responsible for $190 million in movie tickets.

Analysts expect "Far From Home" to hit the billion dollar mark by summer's end — becoming the ninth movie in the Marvel Cinematic Universe to do so.

Staying in the No. 2 spot this week is "Toy Story 4" bringing in an estimated $20.6 million in its fourth weekend out. With a domestic haul of $346 million, "Toy Story 4" is now the fifth highest grossing Pixar film domestically of all time.

Serving as the only newcomer to make the top three this week is "Crawl" bringing in an estimated $12 million in its debut weekend. "Crawl" only cost the folks at Paramount about $14 million to produce so overall a solid opening for this monster thriller.

What's more surprising though are the reviews. As it stands, "Crawl" has an 88% on the tomatometer.

Generally speaking, when movie studios bar critics from seeing a film before its release date you can bet the movie isn't great.

But "Crawl" seems to be the rare exception to the rule, which should help in the coming weeks when this relatively unknown small-budget film is competing with some of the summer's biggest blockbusters.

Speaking of blockbusters, as for next week the Beyonce/Gambino duet alone is worth the price of admission.