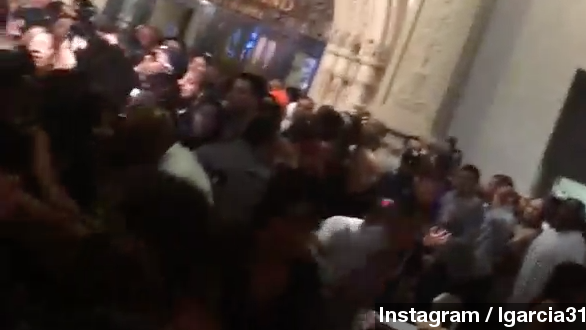 SMS
Fans Injured In Stampede After Mayweather Fight
By Megan McLeod
By Megan McLeod
May 5, 2014
Dozens of spectators are injured after a stampede following the title fight between Floyd Mayweather Jr. and Marcos Maidana Saturday.
SHOW TRANSCRIPT

That was the scene inside the famed casino Saturday after undefeated boxer Mayweather beat Maidana in front of a sold-out crowd of more than 16,000 people.

The Las Vegas Sun reports spectators thought they heard gunshots ring out inside the casino's Garden Arena, but the loud bang was actually triggered by a fallen wall.

The bang sent thousands stampeding toward the exits, trampling several in the process. Witnesses painted a terrifying scene.

WITNESS: "It was just a stampede of people. It was the most scariest thing I've ever been in." (Via KTNV)

REPORTER: "In the middle of it all, a man in a wheelchair."

WITNESS: "That gentleman was 15 feet away from us, on the floor, laying on the ground, in a giant pile of his own blood." (Via KLAS)

Spectators posted dozens of videos on social media, including this one from Rick Rogers. (Via YouTube / Rick Rogers)

The video's description reads, "​Sound of a shot when wall collapsed, ignites human stampede that broke through barricades, shops and restaurants. We witnessed injuries, trampled people and prop damage. We jumped over counter and dived beneath it to temporary safety."

USA Today notes MGM released a statement Sunday saying: "Safety is always a priority at our resort. We are investigating the situation thoroughly to understand more completely what occurred, to assist those affected, and to ensure further safety precautions."

At least 50 people were treated for injuries at the scene, while two dozen others were taken to local hospitals.