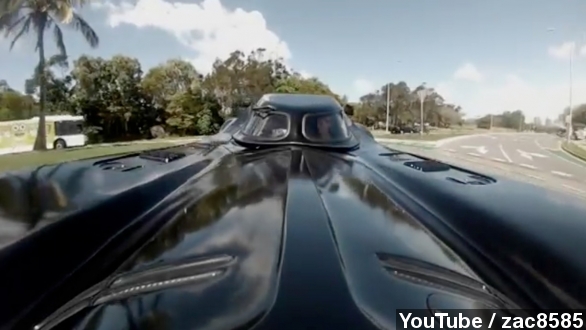 By Christine Slusser
June 12, 2014
A Batman superfan has built a street-legal Batmobile he uses to cheer up sick children. Zac Mihajlovic, 29, may now be the coolest person ever.
SHOW TRANSCRIPT

He's been called the Dark Knight ... the Caped Crusader ... the Masked Manhunter. And he's always been known to have a really, really cool car. (Via Flickr / brian donovan | Boogeyman13 | Jay Javier | Tolka Rover)

Well, 29-year-old Australian Batman superfan Zac Mihajlovic loved the man behind the mask so much, Daily Mail says he has now built a replica of the Batmobile that is registered to drive on the road.

"He even used spare parts from the actual Batman movie."​

According to batmobileaustralia.com, Zac enlisted the help of his grandparents and also Scotty Cox, who owns custom bike shop Scotty's Choppers. Zac says he wanted "to create and bring to life all the magic from the movie." (Via YouTube / zac8585)

We're gonna say mission accomplished. Even though Zac has no mechanical training, he helped build the iconic car —and he says 30 percent of its parts actually came from the 1989 film.

"I mean, it's something that's pretty ridiculous to own. I'm going to give some insurance companies a call, but they'll probably just laugh at me." (Via NineMSN)

And even though it's "ridiculous," Zac is using his Batmobile in a way that would probably make Bruce Wayne proud.

Daily Mirror reports he has turned down offers to buy the car for about $1 million and is instead helping terminally ill children. So far, he's helped complete more than 40 Make-A-Wish requests.

Zac also reached out and got permission from Warner Brothers Australia to make sure there were no licensing issues. Oh, and he also has a Batman motorcycle, because why not?