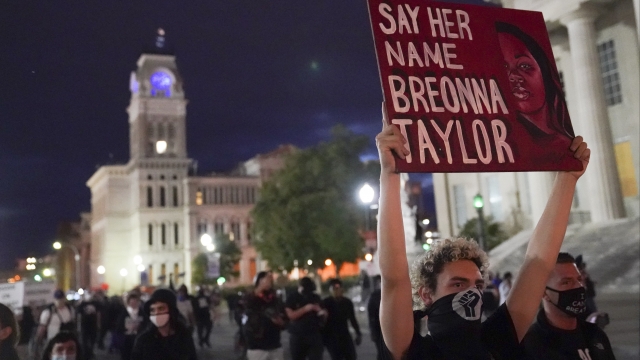 "Crazy that it's been a year, still unbelievable."

The family of Breonna Taylor is still waiting for justice, nearly a year after her death.

The 26-year-old emergency room technician was shot and killed by Louisville police  during a raid at her apartment as part of a drug-trafficking investigation involving a former boyfriend who was not there.

None of the officers who fired shots were charged in her death - though one was charged with wanton endangerment for shots that entered a neighbor's apartment. Taylor's lawyer argues it's still possible for evidence to be presented to a grand jury for potential new charges.

"And at the end of the day, that's what we asked for," Breonna Taylor's family attorney, Lonita Baker, said. "We've always maintained if this was a decision of the grand jury, we may not be happy with it, but we could accept that it was at least presented the way everyone else's charges are presented, however that's yet to happen."

This week, Taylor's mom filed internal affairs complaints against six officers. She accused four of them of misconduct that she called "unacceptable, intolerable and contributing factors to Taylors's death and the deficient investigation thereafter."

It's the latest push from Taylor's family for police accountability, after her death that stirred protests across the country.

Three officers were fired after the raid. It led to the passing of Breonna's law, a Louisville city ordinance that banned police no-knock warrants. The city also settled a lawsuit with Taylor's family in the amount of $12 million and promised to institute policing reforms.

Most recently, a judge dismissed charges against Taylor's new boyfriend at time of the raid. Kenneth Walker was charged with attempted murder of a police officer for firing a shot that hit one officer in the leg. Taylor said he thought intruders were breaking in - and that he had no idea police were at the door.

Louisville's mayor says the city is still working to address racial justice. But Taylor's family still says the city's actions and words since her death have failed to heal the pain of their loss.