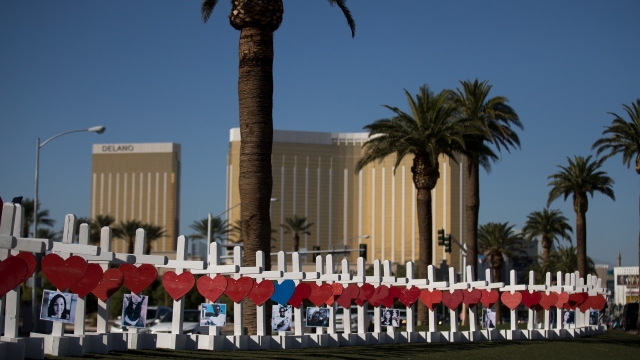 The parents of a victim killed in the 2017 Las Vegas shooting have filed a wrongful death lawsuit against eight gun manufacturers.

The suit, which was filed Tuesday, argues the design of the firearms used in the deadly incident caused the death of the plantiffs' daughter and violated state and federal bans on automatic weapons.

Specifically, it argues the gunmakers were not only aware that the firearm models could be modified to mimic automatic firing, but knowingly marketed them in that way.

It's not the first lawsuit to be filed following the mass shooting, where a man fired at outdoor concert-goers through the window of the Las Vegas Mandalay Bay Resort and Casino, killing dozens and wounding hundreds. Other victims' relatives have sued MGM Resorts International, which owns the property where the shooting took place. MGM's been in settlement talks over the suits, and expects to pay out up to $800 million.

But it is the first related lawsuit to target a gunmaker. As the Associated Press notes, the legal system has generally turned down those cases, citing a 2005 federal law that protects gun manufacturers from liability in mass shooting incidents, with some rare exceptions.

The same legal team representing the plaintiffs in the Nevada case are also responsible for a recent related development in Connecticut Supreme Court. Back in March, justices there ruled that gun manufacturer Remington could be sued over how it marketed the rifle model that was used in the deadly 2012 Sandy Hook Elementary School shooting.