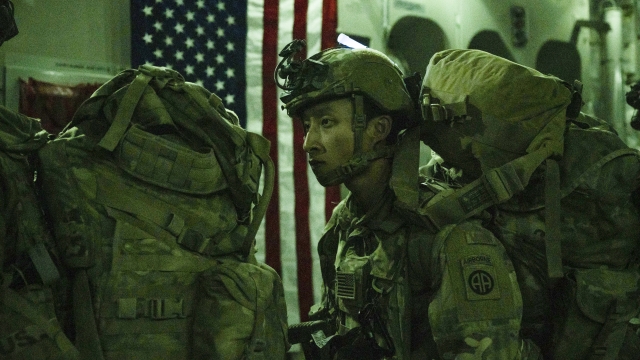 SMS
Family Members Of Veterans Express Frustration Over Afghan Withdrawal
By Meg Hilling
By Meg Hilling
August 31, 2021
Military families say they are faced with tough questions regarding the sacrifice of their loved ones as the U.S. withdraws from Afghanistan.
SHOW TRANSCRIPT

"I think what was it for? What did we go through as a family? What did all these young men and women go through? What...why," Alana Centilli, a military caregiver and a fellow with the Elizabeth Dole Foundation said.

With U.S. troops now fully withdrawn from Afghanistan, many military families say they've been left to face painful questions regarding the sacrifice of their loved ones during the war.

"I want to know that Daniel's sacrifice was worth it," Centilli said.

Alana Centilli is talking about her late stepson Daniel. While serving as a Marine in Afghanistan in 2012, Daniel was severely injured in an explosion. A traumatic brain injury, post-traumatic stress disorder and a host of other medical issues would haunt him for years before he passed away in his sleep in 2019.

"I can say he never really came home in some ways," Centilli said. "Watching how brave he was and watching him struggle and watching his dad, in just how it defined us as a family. I mean, it consumed us."

Alana is a Dole Caregiver Fellow with the Elizabeth Dole Foundation, a nonprofit that supports caregivers of injured or ill U.S. veterans. She says many service members and their families are grappling with the way the U.S. departed Afghanistan and what it means for their legacy.

"I'm not saying we shouldn't have left. I'm not saying that. But the way that it was done was horrific," Centilli said. "For me to see all of Daniel's friends, struggling like they are right now. You know, there's nothing you can do to make them feel better."

Alana is not alone. Tara Plybon,  also a Dole Caregiver Fellow, says the departure has been difficult for her and her husband Todd to watch.

"When people say they lost blood, sweat and tears over there, he literally did, he literally lost almost his whole blood supply,"  Plybon said.

Todd, a retired National Guardsman, was serving in Afghanistan in 2009 when his Humvee struck a roadside bomb. The explosion left Todd with a traumatic brain injury, a severely broken leg, PTSD and permanent damage to his blood chemistry.

"He was a 39-year-old man when he got hurt. Now he's 50. His body is like an eighty-year-old internally," Plybon said. "At first, I thought I was just helping my husband out until he got better and then everything would go back to normal. And it never went back to normal and that was hard to accept."

Around the country, advocacy organizations for service members and their families say they’ve been racing to meet a growing need for support as the withdrawal was finalized.

"We've been reassuring our families that their loved one's life was lived in service to this country. And that we honor that service and remember that life lived," Bonnie Carroll, founder of Tragedy Assistance Program for Survivors said.

Tragedy Assistance Program for Survivors, better known as TAPS, is witnessing a massive jump in calls from military families needing help to work through the emotions the withdrawal has brought on.

"For our families we saw last year, a little over 7,500 newly bereaved surviving families come to TAPS for care. This year, based on the number of family members who have come to us so far, we're on pace in 2021 to have over 9,000 newly bereaved military survivors come to us," Carroll said.

Experts say families whose loved ones survived the war should watch for signs of distress including: nightmares or quick-changing moods, negative thoughts or lack of interest in things they used to enjoy and feeling on edge, sometimes marked by being easily startled.

"Really just access to professional services and professional resources is really the most important component. And, you know, as quickly as we can get them engaged in those programs is really critical," Amy Palmer, president of Soldiers' Angels said.