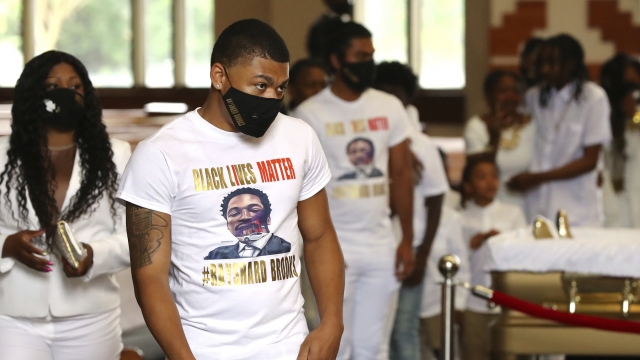 Rayshard Brooks was laid to rest at a private funeral service in Atlanta Tuesday. Many attendees dressed in all white, and others wore shirts and masks that said Black Lives Matter.

"Rayshard Brooks is the latest high-profile casualty in the struggle for justice and a battle for the soul of America," Rev. Raphael Warnock said.

Brooks, the father of three young girls and a teenage stepson, was shot and killed by an Atlanta police officer on June 12, not long after celebrating his daughter's 8th birthday. He was 27. The officer who killed him was fired and faces a felony murder charge. Another officer was put on administrative duty and charged with aggravated assault. Brooks' death came just a few weeks after the killing of George Floyd in Minneapolis police custody, which had led to nationwide protests over systemic racism and police brutality.

His funeral service was livestreamed from the historic Ebenezer Baptist Church, the same church where the Rev. Martin Luther King Jr. served as a co-pastor in the '60s. King's daughter, the Rev. Bernice King, delivered remarks at the service.

Hundreds of people paid their respects during a public viewing at Ebenezer the day before.