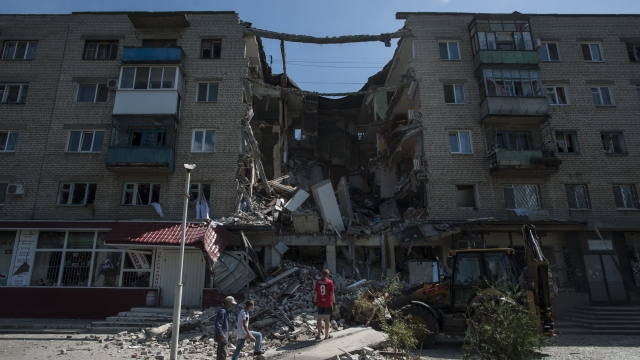 SMS
Families Want Information On Missing Americans In Ukraine
By Jason Bellini
By Jason Bellini
June 16, 2022
The two Alabama natives, if they were captured, would be the first Americans known to have become prisoners of the Russians.
SHOW TRANSCRIPT

Three Americans are missing in action in Ukraine. Two of them disappeared from the same unit on June 9.

"I just want to see him back safely." said Joy Black, a fiancé of an American feared captured by Russian forces.

Their families say the men, both U.S. Military veterans, came under heavy fire while fighting alongside Ukrainian forces north of Kharkiv, and they believe they're being held captive by the Russians.

The other man, Andy Tai Ngoc Huynh, is a 27-year-old former Marine.

The White House is tracking the situation and offered this reminder of its position on Americans signing up to fight in Ukraine.

"It's not the time for Americans to go to Ukraine during this time of war. The State Department has put out numerous travel advisories warning Americans not to travel there and use it in urging Americans to leave immediately if you are." White House Press Secretary Karine Jean-Pierre said.

The two Alabama natives, if they were captured, would be the first Americans known to have become prisoners of the Russians.

One American and former U.S. Marine, 22-year-old Willy Joseph Cancel, has been killed.

It’s not known how many Americans are fighting for Ukraine. In May, Newsy met one of them who asked us to call him "Alex."

Ukraine’s Foreign Legion has welcomed thousands of foreign fighters. It’s not known how many have died in battle. Last week, in Russia-occupied eastern Ukraine, two Britons and a Moroccan were convicted of being mercenaries and sentenced to death.

Meanwhile, two families in the U.S. are pleading for information on their loved ones.

"If they're together — Andy and Alex — we don't want one to come home without the other," Alex Drueke's mother, Bunny, said.