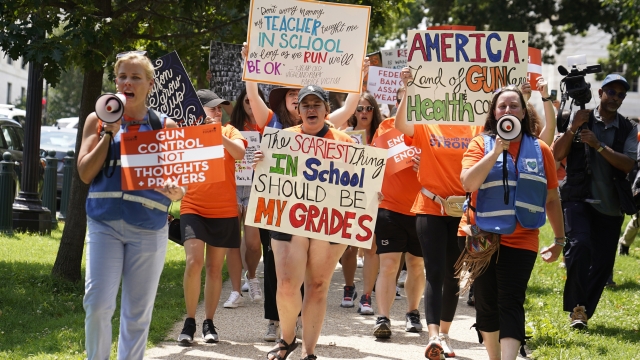 SMS
Families United By Mass Shootings Call For Ban On Assault Weapons
By Nathaniel Reed
By Nathaniel Reed
July 13, 2022
Families affected by mass shootings across the U.S. protested outside of the Capitol, calling on Congress to ban assault weapons.

Angel Garza's daughter, Amerie Jo, was one of the 19 children killed in Uvalde, Texas. He spoke outside the U.S. Capitol Wednesday during a rally calling on Congress to ban assault weapons.

"I'm begging you to make a change," he said. "Nobody sits here and thinks about these things because it doesn't happen to them. I promise you, you do not want this to happen to you. I promise you."

Andrea DiMattina traveled from Glenview, Illinois, to participate in the rally.

"Listening to the parents from Uvalde this afternoon just crushed my soul. We gotta keep showing up," she said.

Faye Rosenberg traveled with her daughter from Highland Park, Illinois, to also participate in the rally.

"We're not going to stop until something is done," she said.

The event was organized in less than a week by March Fourth, a group of mothers from Highland Park, Illinois, where a gunman killed seven people and wounded over 30 others at this year's July Fourth parade.

The rally attracted several hundred people, including some members of Congress, who joined in on calls to ban the types of weapons used in recent shootings in Uvalde, Buffalo and Highland Park.

The members of Congress included Rep. Brad Schneider, who was at the Highland Park shooting.

"The sound of those bullets striking flesh, causing death, terrorizing a community — those aren't the sounds you hear in the United States on the Fourth of July. These are the sounds you hear on the battlefield of war. Those are weapons of war. They don't belong on the streets," Schneider said.

Shannon Barlow, a licensed clinical professional counselor, was also at the parade with her husband and two kids.

"I had to help my kids and the whole community get over this major trauma that should have never happened to them. They should have been collecting candy off of floats on the Fourth of July. And instead, they are terrified to go out in public, as is the rest of the community," Barlow said.

Despite calls to action, not all Democrats in Congress support reinstating the assault weapons ban.

"I'm going to protest this till my dying day. These are brilliant people and we are going to do it. We don't stop," Rosenberg said.