Families Of Americans Killed By ISIS Praise Raid On Al-Baghdadi 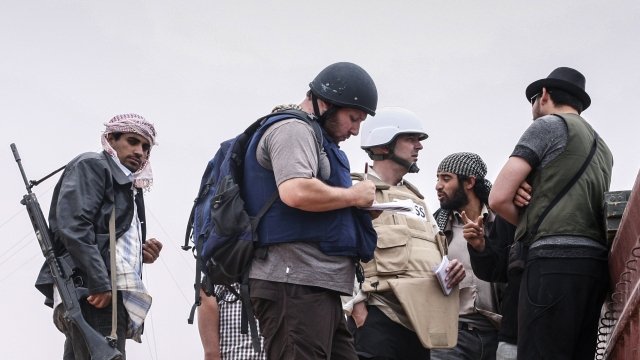 The families of four Americans killed by ISIS are praising the military operation that led to the death of its leader, Abu Bakr al-Baghdadi. Their deaths were highlighted by President Trump in a speech Sunday following the nighttime raid on al-Baghdadi by U.S. special forces.

Journalist James Foley was abducted by ISIS in November 2012 while reporting in northern Syria. In August 2014, a video released by ISIS showed him being killed by one of its agents.

His mother, Diane Foley, said at the time that he had given his life "trying to expose the world to the suffering of the Syrian people." On Monday, she told CNN that news of the operation came as "a welcome surprise."

She said: "I'm very, very grateful. I'm hopeful that his demise will be a huge blow to the regrouping of ISIS. However, we need to continue to be very vigilant, because they certainly want to regroup and bring back their reign of terror."

Journalist Steven Sotloff was taken by ISIS in August 2013 after crossing into Syria from Turkey. He was killed by the group just over a year later. In a statement, his mother, Shirley Sotloff, said the family was "happy" al-Baghdadi was gone.

She said: "While the victory will not bring our beloved son Steven back to us, it is a significant step in the campaign against ISIS."

Aid worker Abdul-Rahman Peter Kassig was taken hostage by ISIS in October 2013 and reportedly shared a cell with both Foley and Sotloff. He was killed in 2014 in retaliation for U.S. airstrikes in Iraq and Syria. On Sunday, Kassig's family prayed for peace in a message posted to his memorial Facebook page.

At the time of their son’s death, the Kassigs offered a statement: "[Peter] has chosen to believe in the good in himself and in others. Peter's life is evidence that he’s been right all along, one person can make a difference."

Kayla Mueller was another aid worker kidnapped in 2013. In 2015, the U.S. government confirmed she had been killed in Syria, but the details of her death are unclear.

ISIS alleged that she was killed in a Jordanian airstrike, which the Jordanian government has denied. Mueller was reportedly abused and raped by al-Baghdadi while in captivity. Sunday's operation was named in her honor.

Speaking to the Arizona Republic, her mother, Marsha Mueller, said: "I still want to know, where is Kayla? Someone knows, and I'm praying with all my heart that someone in this world will bring us those answers."