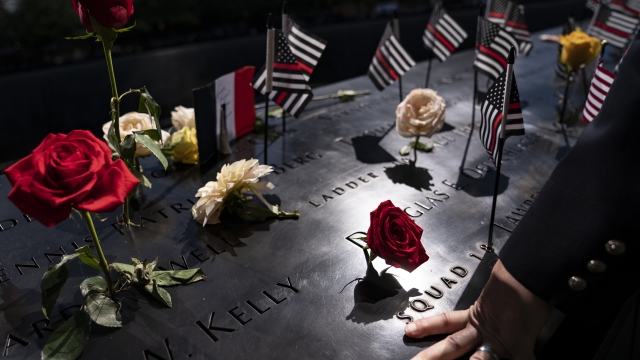 A U.S. drone strike killed Al-Qaeda leader Ayman al-Zawahri, who is long believed to be the man behind the plan for the Sept. 11 terrorist attacks on the U.S. that killed almost 3,000 people, took down the twin towers and damaged the Pentagon.

National Chair of 9/11 Families United, Terry Strada, whose husband was killed in the Sept. 11 attacks, spoke with "Morning Rush" host Rob Nelson about how families members linked to the attacks are reacting to al-Zawahri's death.

NEWSY'S ROB NELSON: Terry, you were with us last week as well, thanks for coming back. We really do appreciate it. This is obviously personal to you, for a number of of reasons. Talk about when this headline broke last night and if you watched the president's address to the nation yesterday evening, what was your gut reaction?

TERRY STRADA: You know, it should be a very good thing, right? It's a positive thing to have this type evil removed from the planet, removed from our lives, removed from Al-Qaeda. Getting somebody of that level, you know, he's the one that's been in charge since Osama bin Laden was taken out, and having him removed is a very good, positive step forward in accountability for Sept. 11, but it's not full accountability yet.

NELSON: What would full accountability look like to you?

STRADA: President Biden is well aware that the 9/11 families and myself have been asking to meet with him since he took office, since the 20th anniversary, since he planned his trip to go over to the Kingdom of Saudi Arabia. 9/11 accountability for us is going after the pay masters and holding the kingdom accountable for the role they played in financing the attacks and the logistical support that they gave to the 19 hijackers. The financiers are still running around free as a bird. They are getting met by fist bumps by the president and they're getting hosted at golf clubs by the former president. If we are going to really have full accountability for the horrendous murders that took place on Sept. 11, we need to go after the source of the funding, and that all came from the Kingdom of Saudi Arabia.

NELSON: I'm so glad you brought that up because that's really the main question I wanted to ask you, because, as you just said, you had Biden's trip to Saudi Arabia, you have the now-infamous fist bump, you have former President Trump hosting the Saudi-backed golf tournament at his facility in New Jersey and then gave a statement saying we've never gotten to the bottom of 9/11. So, you have all of that, but then you have this news yesterday that basically Osama bin Laden's deputy, his No. 2 who helped oversee 9/11, was killed in what apparently was an amazingly precise strike. It is a mixed message in a lot of ways. How do you reconcile, just the last few weeks in this country, the news we've gotten about our relationship to this country that was behind this horrific attack and one of the darkest days this country has ever seen.

STRADA: Right. So it's been a roller coaster of emotions because former President Trump has — I can't really say it on TV — but he's acted horribly toward the families and his comments were horrendous that we've never gotten to the bottom of that. We met with him in the White House to discuss the FBI reports that are all about the investigations into the kingdom so he's well aware of what he knew then and what we've been trying to have this current president now deal with because the evidence has come out. These reports have been declassified at the order of President Biden. Again, that's a step forward in the right direction, but it won't mean anything if you just release documents but then you don't go hold financiers accountable, the very country that all of these documents are showing, confirming that their state-funded institutions, that their agents, that their banks, that their charity system, that their wealthy Saudi nationals and their agents they sent over here to the United States to set up support network. All of that evidence now has been declassified to the greatest extent possible. And we know so much. But now to the president's obligation is to deal with the kingdom. The fist bump was a slap in the face and we need him to do better. We need him to speak with us and work all of this out.

NELSON: We're almost 21 years out from the attack and in light of this news, it now appears that all of the principal organizers and leaders of 9/11 have been killed or or have been have been captured. And I'm curious — we all remember that moment when President Obama announced that bin Laden was dead. That was a face and a name that everyone knew; it seemed to be such a victory for the country. Fast-forward a decade, now we have this news of bin Laden's deputy being killed. But I'm wondering, on a personal level, is it comfort? Is it closure? Because we're so many years out — the rest of us who are not directly impacted — we're so many years out from the initial tragedy. Zawahri was not a household name that bin Laden was, so it may not resonate with people the same way the news did 10 years ago, 11 years ago. But how does it feel to you, personally? Is it a comfort? Is it closures, as people like to say? I don't think a 9/11 widow ever really gets closure because nothing brings your husband back.

STRADA: You're right. That is the problem, that no matter where we go or how far we get with all of this, he'll never come home to us. But having this type of evil removed, having a leader like this in Al-Qaeda removed from that network, it's a good thing. It's a positive thing. How do I feel? That's exactly how I felt. I said, "OK. This is good. It's the right step in the right direction." But, because I've been doing this since 2002, you know, trying to uncover and unravel all of the players that were involved with Sept. 11 — and for me, I'm not the intelligence agencies, right, that can go after the bad guys. I mean, I'm a widow. What can I do? What can I do to force our administrations to come clean with the truth and to deal with the Kingdom of Saudi Arabia, to deal with the people that are actually the ones that created the ideology, that spurred these hijackers, that inspired them to carry out the attacks? The ideology still exists and the kingdom needs to be held accountable for unleashing that on the world. They need to be held accountable because that is what led to the Sept. 11 attacks. So again, it's a positive that he's removed. I'm happy that this evil is no longer on our planet. I'm very much afraid of what will happen next. You know, there can always be another person to take his place and as long as the funding has never been dealt with, we're not going to be safe. That's what I've said for years: As long as there are well-funded terrorist organizations out there vowing to kill and destroy us, we aren't safe. And we need to cut off the funding and deal with the Kingdom of Saudi Arabia for all of what I've already outlined — All of the egregious activities that led up to the Sept. 11 attack and murder of my husband.

NELSON: And as a reminder, Zawahri wrote in a manifesto back in '98: "To kill Americans and their allies — civilian and military — is an individual duty for every Muslim who can do it in every country in which it is possible to do it." And to your point, where one of these guys gets taken out, someone else steps up. Last question: We're a few weeks away from yet another 9/11 anniversary. In light of the last few weeks, will this one feel any different for you this year?

STRADA: I think it's going to feel very tumultuous because we have all of this unsettled business. So, we have a president who has refused to sit down with us, and we need that. That is so important for us to finish this, you know, going after Al-Qaeda, going after terrorism. If we don't meet with President Biden, if he continues to refuse to meet with us — it's a very unsettling feeling to be ignored like that, you know — indifference. I think it was Plato that said something about the smart men who are indifferent will lead to evil ruling the world. And that is what I'm afraid of. So, I think I'm very unsettled going into this anniversary, but I'm still hopeful that we will get a meeting with the president and we will start to move in the right direction on all 9/11 accountability.

NELSON: Unsettled, but hopeful. Terry Strada, chair of the 9/11 Families United organization. Thank you, once again, for giving "Morning Rush" some time. We appreciate it.