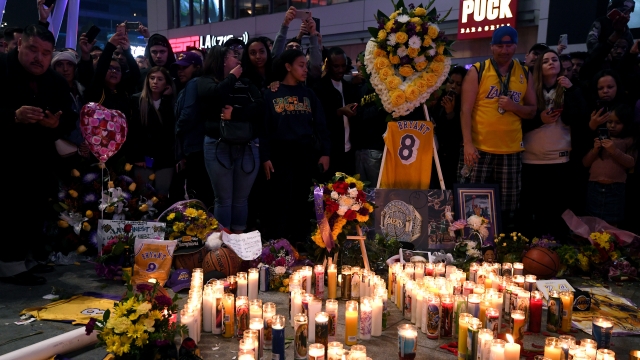 SMS
Families Name Others Killed In Helicopter Crash
By Meg Hilling
By Meg Hilling
January 27, 2020
A baseball coach, a basketball coach and young girls are among those killed in the helicopter crash with Kobe Bryant.
SHOW TRANSCRIPT

Family members are releasing the names of others killed alongside Kobe Bryant and his daughter in Sunday's helicopter crash near Calabasas, California.

Orange Coast College baseball coach John Altobelli, his wife Keri and their daughter Alyssa were on board the helicopter that was on its way to Mamba Sports Academy in Thousand Oaks, for a basketball tournament.

Alyssa and Bryant's daughter Gianna were reportedly teammates. A statement from Orange Coast College, where John was a baseball coach for 27 years, says the family leaves behind a son and daughter.

Christina Mauser, a basketball coach, was also reportedly aboard the helicopter and leaves behind a husband and children. Sarah Chester and her daughter Payton are also listed among those who died, as well as pilot Ara Zobayan.