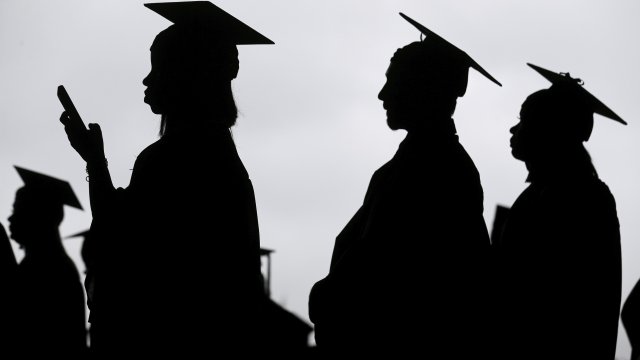 Suspected reasons for the 7.5% enrollment decline include people being too busy helping their kids with school work and poor internet connections.

When a recession hits, enrollment at community colleges tends to go up. That was expected to happen again this fall amid the coronavirus pandemic — but early data shows that's not the case. Two-year public colleges saw a 7.5% decline in enrollment this fall compared to 2019.

"Considering that community colleges serve the majority of underrepresented students in the United States, the majority of our students are older and they work, they probably have been impacted by the pandemic," said Martha Parham, Senior Vice President, Public Relations, at the American Association of Community Colleges.

Among the suspected reasons are that people are juggling a lot outside the classroom due to COVID-19, like balancing their responsibilities while helping kids with school work. Poor internet connections make it hard to access online college classes, too.

This fall, Black students saw a 12% decline in enrollment, compared to 9% of white students and 8% of Hispanic students.

"This is an issue that we're paying very close attention to, we're very concerned about, particularly as it relates to any loss of enrollment for our most vulnerable student populations," California Community Colleges Chancellor Eloy Ortiz Oakley said at a  September 24 board of governors meeting.

Plus, fewer students on campus means less tuition coming in, especially as public colleges may be facing a big blow in state financial support amid the pandemic.

And like many of its peers, Michigan's Oakland Community College expected to see an uptick this semester, but that's not the case.

"There's about a 6% decline in enrollment, and then about a two and a half percent decline in credit hours," said Peter Provenzano, chancellor of Oakland Community College.

But Chancellor Peter Provenzano remains optimistic that the trend can turn around. The school identified new enrollment opportunities, like adults looking for non-credit classes to learn a skill, as they figure out the future.

"I really think that we’re going to fall, post-pandemic, somewhere in between the way things were and the way things are," said Provenzano. "And that's something that community college presidents are all talking about. What does that look like?"